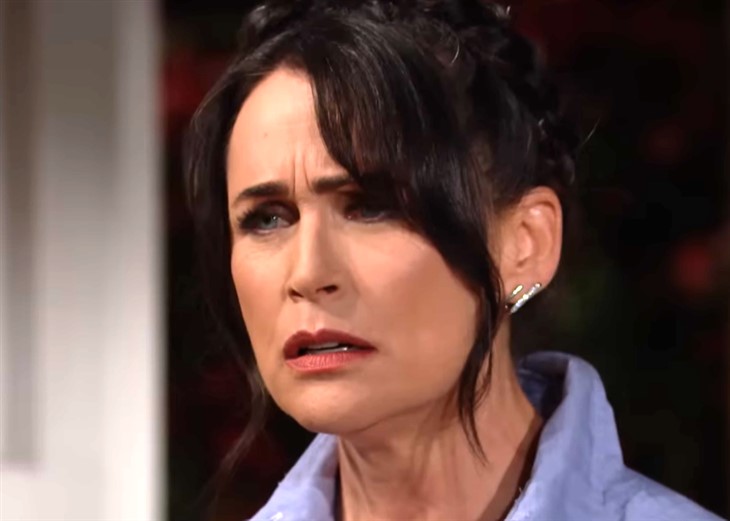 The Bold and the Beautiful (B&B) spoilers reveal Quinn making it to Carter’s wedding before he says ‘I do’ but will that be enough to stop him?

The Bold And The Beautiful Spoilers – Quinn Makes A Mad Dash

No, Quinn Fuller (Rena Sofer) will not run all the way from the country club to Il Giordino to stop Carter Walton (Lawrence Saint-Victor) from marrying Paris Buckingham (Diamond White). Instead, she will get on a bike and ride down the boardwalk to finally claim her man since her other man — her husband of six years — turned out to be a dud.

Quinn did everything she could to change for Eric Forrester (John McCook), but she can be herself with Carter Walton. Still, when Eric wanted her back last year after confessing the reason he rejected her sexually was due to erectile dysfunction, she ran right back to him to try to make her marriage work despite Carter’s pleas.

Of course, Carter couldn’t be alone for long and somehow got himself mixed up with Paris, Zoe Buckingham’s (Kiara Barnes) highly confused and allegedly perfect younger sister. He also had Grace Buckingham (Cassandra Creech) ordering him around and telling him not to hurt another daughter.

Well, now Quinn knows that Eric has been having an affair behind her back with Donna Logan (Jennifer Gareis) for months, claiming he is off to play pickleball. With her marriage essentially over, Quinn realizes it’s Carter who she really wants to be with anyway, but she needs to stop the wedding he decided needed to happen right away after Quinn’s rejection last week.

Quinn does make it there in the middle of the ceremony and declares she wants to spend the rest of her life with Carter because it’s him she really loves and all Paris wants to do is speed things along. She tells Carter to order Quinn away, but Carter is torn. On the one hand, Quinn keeps rejecting him, but on the other hand, he is in love with her.

Plus, he told Ridge Forrester (Thorsten Kaye) that the only reason he was doing this was so that Paris wouldn’t tell Eric that he and Quinn still have feelings for one another. Will Quinn announce right then and there what Eric did and change Carter’s mind? Stay tuned to The Bold and the Beautiful weekdays to find out.