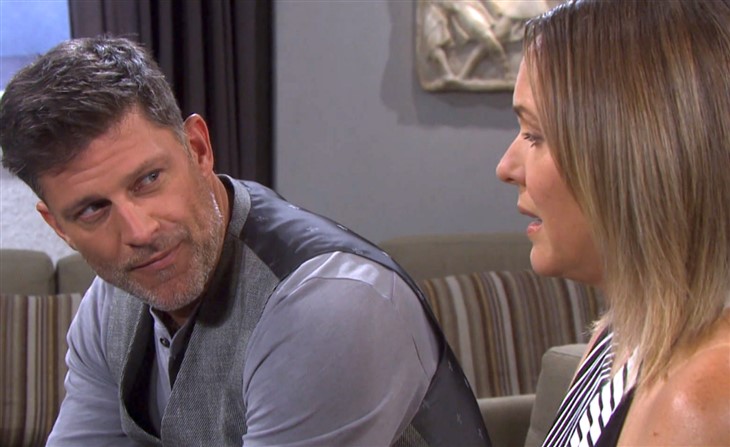 Days of Our Lives (DOOL) spoilers for Thursday, December 1, 2022, reveal Eric and Nicole fighting in a way they never have before.

Days Of Our Lives Spoilers – Nicole Walker Was Not Expecting This

Maybe Nicole Walker (Arianne Zucker) might have had a few thoughts before she opened her big mouth and told Jada Hunter (Elia Cantu) how horrible pregnancy and single motherhood are. While she really didn’t mean to convince Jada to have an abortion as that’s a huge decision only the pregnant woman should make, she sure had a hand in that decision.

As for Eric, his fury knows no bounds as he blows up at her and her poor choices. He was looking forward to being a father after all this time and finally had his chance. He truly feels it was Nicole’s big mouth that took that chance away from him. Nicole is always causing her own problems and this time, she might not be able to fix things. Yes, their marriage ended due to her affair (and Eric neglecting her), but Eric might not be able to forgive this one.

As for Jada, spoilers say she gets support from an unexpected source. Is this now the beginning of something between Jada and Rafe Hernandez (Galen Gering)? They do seem to have some chemistry and like Eric, they both have a bone to pick with Nicole and her own selfishness. Or perhaps Chloe Lane (Nadia Bjorlin) becomes a friend as she didn’t even want to hand Nicole her own child when she was a newborn.

Abe Carver (James Reynolds) should know by now that he married a woman who is always plotting and planning. Sometimes Paulina Price Carver (Jackee Harry) does it behind his back, but she seems to have learned her lesson and fills Abe in on her latest scheme to save poor Chanel Dupree (Raven Bowens). She just hopes Abe will go along with it.

As for Chanel, has she even been arraigned yet or is she still sitting in the Salem PD interrogation room in the same dress she wore on Election Day when she was first arrested? Maybe Paulina’s plan is to get her daughter some new clothes to wear in Statesville. Stream Days of Our Lives weekdays on Peacock by 6 am EST to see how these stories play out.