GH Spoilers: Michael Lets Carly In On The Real Reason Willow Is Hunting For Her Birth Parents 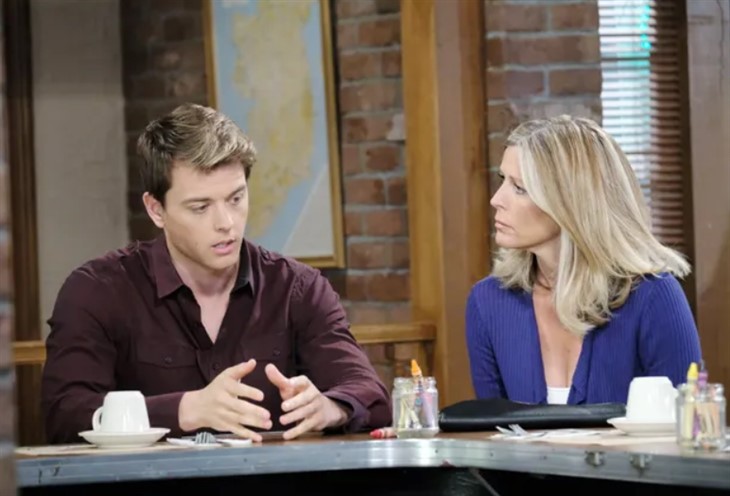 General Hospital spoilers reveals Michael Corinthos (Chad Duell) is about to share some news with Carly Spencer (Laura Wright) that is going to floor her. Carly will feel instant compassion for her son and his growing little family, but that’s going to change on a dime when Michael tells her the whole story.

He will struggle to wrap his head around Carly’s response to the news and might chalk it up to how surprised she was for a little while. However, when Carly is still a bundle of nerves the next time he sees her, he’s going to suspect something is up.

Carly is baffled when Michael tells her Willow Tait (Katelyn MacMullen) has decided to search for her birth parents after all. Carly was certain about Willow’s confidence that she didn’t want to know where she came from.

Just a few months ago, Willow felt like Harmony Miller (Inga Cadranel) was the only mother she would ever need to know, and she was pretty worried the alternative would turn out to be someone like Nina Reeves (Cynthia Watros). Needless to say, this made Carly feel validated in deciding to keep the truth about Nina being Willow’s mother to herself. Now, Carly’s world is about to turn upside-down with Michael and Willow’s.

At first, Carly is feeling pretty confident that she can persuade Willow not to go down this road. The way Carly sees it, there’s no sense in dredging up those memories now, and it’s possible that Willow’s birth parents are worse options than she ever would have had with Harmony, who truly loved her daughter.

But then Michael hands her the shock of her life. Willow isn’t just pregnant with Carly’s next grandchild. She’s also battling cancer, and she could die if she doesn’t receive a bone marrow transplant soon, let alone her child. Carly will quickly recognize there is no way for her to even attempt to dismantle this plan, and that she might have to be a part of it instead to keep everyone from finding out the truth.

General Hospital Spoilers — Carly Spencer Is Heartbroken, Then A Ball Of Nerves

This is a lose-lose situation for Carly. On one hand, if she diverts everyone’s attention away from Nina so that they never find out she’s Willow’s mother, then the secret stays safe, Willow stays as protected as Harmony wanted her to be, and Drew Cain (Cameron Mathison) never has to know Carly lied to him. On the other hand, Carly’s success could also spell Willow’s death. Is it worth it? Carly is going to struggle to come to grips with which way to go, knowing there is heartache ahead on both ends. Stay tuned for more General Hospital news, updates, and spoilers as they become available.