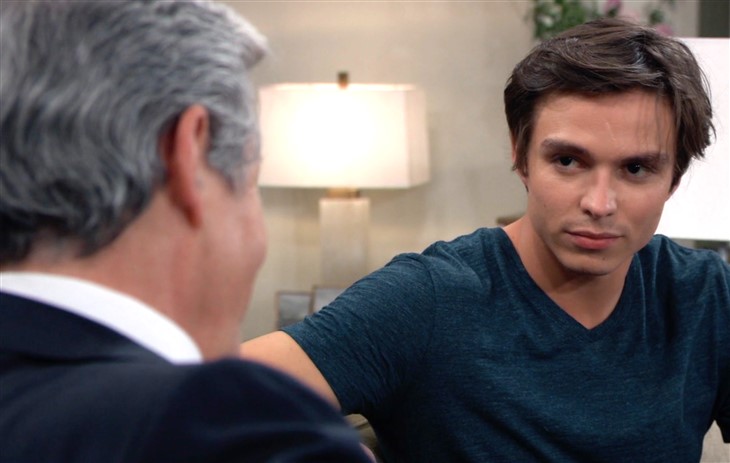 General Hospital’s Spencer Cassadine (Nicholas Chavez) needs a shoulder to cry on after Esme Prince (Avery Kristen Pohl) dropped her “baby bomb.” Unfortunately, Spencer will open up to the wrong uncle. How will Victor Cassadine (Charles Shaughnessy) twist this to his advantage?

Until now, General Hospital’s Spencer has been nothing but a carefree spoiled son of a prince. Now, Spencer is having to look past his childish pranks and endless stalking to come to terms with a real-world issue. Spencer is terrified that he may be about to become a father. After all, it’s not like he’s had the best example of one.

If Nikolas Cassadine (Marcus Coloma) wasn’t spoiling Spencer beyond belief, he was ignoring him. Nikolas even faked his death and allowed his son to believe he was dead for three years. Meanwhile, Victor has been there for Spencer to rely on lately and has wormed his way into Spencer’s good graces. Spencer has no idea how ruthless his Uncle Victor can be.

It seems that Victor plans to use the Ice Princess to help further his scheme. Victor continues to try to pull the family closer to him and that could only mean he is up to something big. Victor is also not beyond using Spencer’s secret to further his needs either. How far will Victor go with his plans?

General Hospital spoilers say Spencer may feel close to Victor, however, he should have taken this concern to his Uncle Sonny Corinthos (Maurice Benard). After all, Sonny has had children with several women in Port Charles and knows all about baby issues. Sonny would probably also advise Spencer to get all of his facts straight first.

Spencer is very concerned about being tied to Esme for the rest of his life. Sonny is onto Esme and could help Spencer deal with this whole situation. Will Victor use this “so-called” baby to lure Spencer into his plan? Will Sonny save Spencer from Esme in the end?

Spencer has certainly confided in the wrong man and could end up stuck with Esme if he doesn’t find out the truth about his farce. Will Spencer learn that Esme is lying before it’s too late?

B&B Spoilers: Is Brooke Heading Back to Ridge or Away Forever?