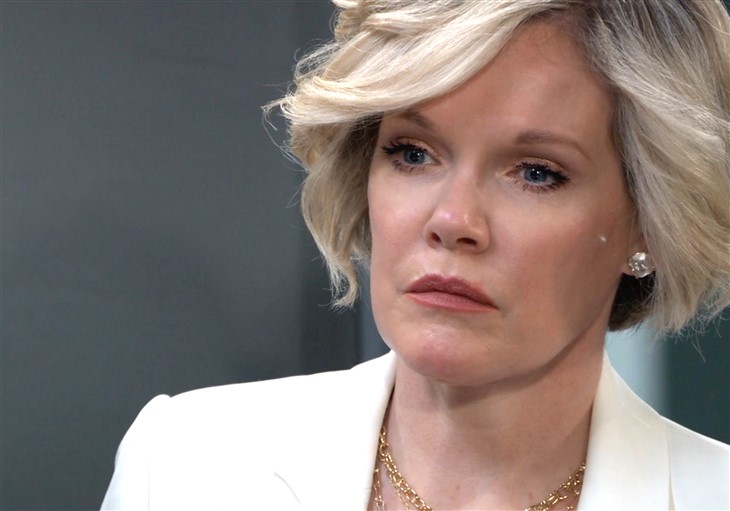 First, up in Monday’s General Hospital, tensions arise at a family get-together at The Metro Court as Violet asks Brook Lynn Quartermaine (Amanda Setton) where her baby is; General Hospital viewers thought her daddy, Finn already would have explained that to her! Viewers will recall now that the Peter August (Wes Ramsey) crisis is over and he is dead, “Bailey Lois Quartermaine” is now Bailey Louise Jones (London and Jett Prinzo-Berendt) and is back with her mother, Maxie Jones (Kirsten Storms)!

Gregory Chase returns and gives Harrison Chase (Josh Swickard) a hug and tells him he’s glad to see him.  Elsewhere in The Metro Court, Finn is talking to Elizabeth Baldwin (Rebecca Herbst) after she discovered something unsettling after a conversation she’d had with Laura Collins (Genie Francis). Finn reassures Liz that he’ll be by her side no matter what!

At General Hospital, Brad Cooper is in Terry Randolph’s (Cassandra James) office interviewing for the job that Britt recommended him for last week on General Hospital, hoping that Terry won’t hold his past against him. Brad tells Terry he hopes that she might still believe in second chances, which is understandable considering his past employment at the General Hospital lab where he falsified quite a few lab tests!

Meanwhile, Britt is dealing with his Aunt Selina who surprisingly had invited Britt to have lunch with her and talk. Viewers will recall that prior to her trip abroad, Selina didn’t want Brad and Britt to have anything to do with one another, and this is probably more of the same. Britt shakes her head quizzically at Selina and asks her why would she do that, likely meaning stay away from her best friend?

General Hospital viewers will remember from recent episodes of General Hospital, that Nikolas Cassadine (Marcus Coloma) invited Spencer and his might-be-pregnant girlfriend Esme Prince (Avery Kristen Pohl) to live in Wyndemere Castle. Nikolas and Victor Cassadine (Charles Shaughnessy) had rescued Esme from her forced questioning by Sonny Corinthos (Maurice Benard), Nikolas felt security was better at Wyndemere; Ava is livid at Nikolas for making that decision behind her back!

On top of everything else, there was Esme reading “What To Expect When You’re Expecting”, and Ava lashes out at Nikolas, asking him what’s it going to be, understandable since Esme framed Trina Robinson (Tabyana Ali) and Ava knows it! Elsewhere, Spencer talks to Esme alone, and pressures her to take that at-home pregnancy test that she’s been procrastinating about right then and there! Spencer likely tells her she has to take the test and show him the results if he’s to believe she’s really pregnant and not faking, and Esme is going to have to toe the line or face the consequences!

Y&R Spoilers: Ashland Locke Refuses To Back Down