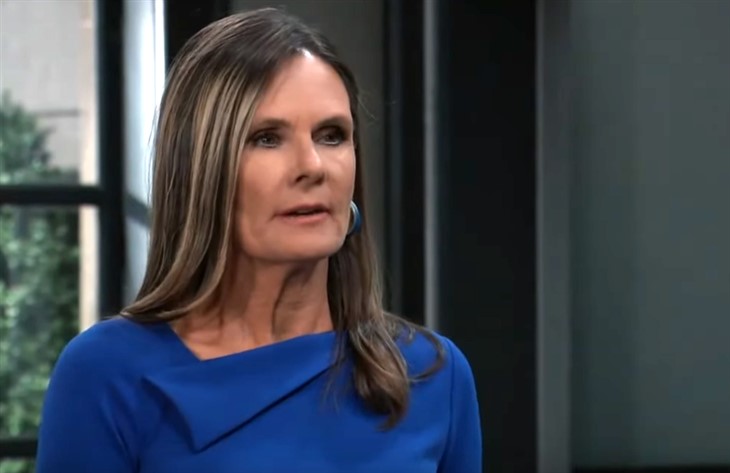 General Hospital spoilers reveals no one has seen or heard from Lucy Coe (Lynn Herring) since Victor Cassadine’s (Charles Shaugnessy) drone footage caught video of her being shot on the pier by someone who appeared to be Anna Devane (Finola Hughes).

Her loved ones have been desperate to figure out what happened to her, and no one believes Anna actually shot Lucy or would ever harm her. Scott Baldwin (Kin Shriner) is one of those people, and when he receives a phone call from Lucy asking for his help, he’s going to know Victor is behind it all.

Lucy won’t have much time to make small talk with Scott. These two might not always see eye to eye, but they do go way back, and they’re more or less parents together. So it makes sense that she would feel safe reaching out to him. Besides, Scott’s a lawyer and he’s always willing to go the extra mile in the name of justice.

When Lucy calls him, he may have a hard time hearing her. We’re expecting that she’s being held hostage somewhere close enough to Port Charles, but she only managed to sneak access to a phone. Will she tell Scott that Anna shot her? How will she explain being knocked down and carted away by two men, and later realizing she was never really shot?

GH Spoilers – Tease Scott Baldwin Doesn’t Have All the Answers

According to General Hospital spoilers, Scott is going to be stunned to hear from Lucy, but he will struggle with ways to help her when she doesn’t really have any information to give him. Of course, Scott doesn’t know all that Robert Scorpio (Tristan Rogers) and Holly Sutton (Emma Samms) do — but they might compare notes soon after Scott tells them he’s heard from Lucy. Will Robert and Holly tell Scott the truth about Holly’s offenses, or are they going to keep her dark secrets between themselves and hope that Victor never shares his version of events either?

General Hospital Spoilers — Lucy Coe Doesn’t Know Where She Is

The biggest hang-up for Scott is that Lucy doesn’t know where she’s being held. So there’s no hope of going to rescue her. However, it’s going to provide some peace and relief for all the many people who love Lucy to hear that she isn’t dead — especially Martin ‘Marty’ Grey (Michael E. Knight). At this point, expect Marty and Valentin Cassadine (James Patrick Stuart) to team up in an effort to track Lucy down. Stay tuned for more GH news and updates just ahead.