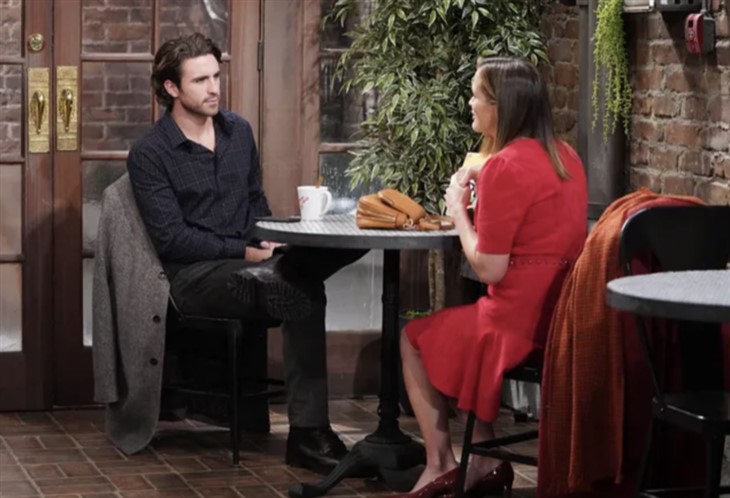 The Young and the Restless spoilers show that there may be another love triangle coming up, or at least a secret one that only a few people know about. As we know, Chelsea Lawson (Melissa Claire Egan) has no problem falling for other people’s husbands. We’ve seen it with Rey Rosales (Jordi Vilasuso) and she just swapped spit with Billy Abbott (Jason Thompson) in the podcast booth.

Will she continue making her way through the Genoa City ‘taken men’ club and will Sharon Rosales (Sharon Case) be the one who sees her dirty little game and either keep it inside or break the news to Abby Newman (Melissa Ordway)?

The Young and the Restless Spoilers – Chelsea Lawson And Chance Chancellor Sitting In A Tree?

It looks like Chance is positioned to be Chelsea’s knight in shining armor as she struggles to put her life back together, and Chance has already been seeing the cracks in his marriage to Abby only get worse. Sharon sees a moment between the two of them and it’s clear that their connection is on her radar.

Chelsea and Chance seem like they are heading for an affair or at the very least a juicy hookup. Of course, secrets like this tend to get out and around in Genoa City!

If the news of this event were to get out, that would leave Sharon in quite a pickle being the one who knows what’s going on and it would be incredibly difficult for her to keep it from Abby. Though to be honest, it might be kind of fun to see Sharon narc on Chelsea and Chance.

Chance has become a completely different person since coming back and everything that has happened between him, Abby and Devon Hamilton (Bryton James) has definitely taken a toll on him. We can see why, but is it really enough pressure for him to fall into bed with another woman?

I think so. If Chelsea gets her way, they’ll be sleeping together by the end of the month. Of course, if Chance does have that guilty conscious come into play, maybe he’ll put a stop to Chelsea’s advances.

What do you think? Is there a chance that Chelsea and Chance could have an affair and do you think Sharon would be able to tell Abby what was happening behind her back? Share your thoughts and remember to keep watching the CBS soap to see what happens next.