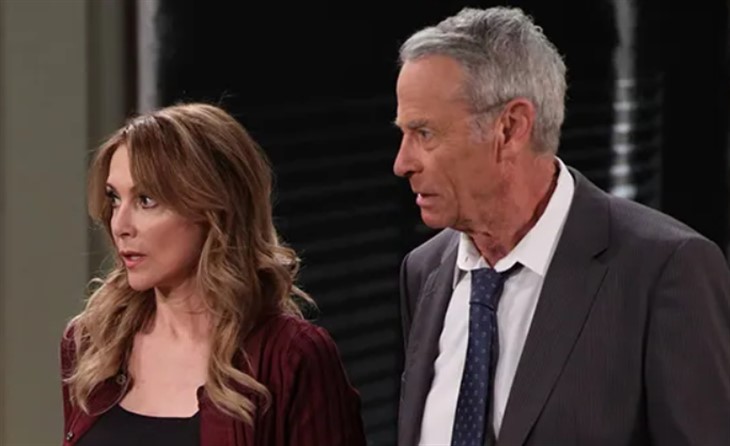 General Hospital spoilers for the next two weeks indicate that Robert Scorpio (Tristan Rogers) will demand answers from Holly Sutton (Emma Samms). Robert knows Holly is working for Victor Cassadine (Charles Shaughnessy) will she tell him the truth? Willow Tait (Katelyn McMullen) will face another health crisis. Valentin Cassadine (James Patrick Stuart) will need a favor from Sonny Corinthos (Maurice Benard) what is it?

Austin Gatlin Holt (Roger Howarth) will support Britt Westbourne (Kelly Thiebaud) as she visits Dr. Talone (Sharon Omi). Unfortunately, Britt will end up needing much more support as Huntington’s disease leads to a very grim prognosis. How will Liesl Obrecht (Kathleen Gati) handle this news when Britt opens up to her about her prognosis?

Carly Spencer (Laura Wright) will lie to Sonny about the connection between her meeting with Brick (Stephen A. Smith) and Dex Heller (Evan Hofer). Michael Corinthos (Chad Duell) will give Carly an update later. Carly may be upset because she thinks Drew Cain (Cameron Mathison) is getting too close to the truth about Willow’s mother. Carly will get a reminder of how much she wants Nina Reeves (Cynthia Watros) away from the family.

Of course, the show will be preempted on November 24 and November 25 because of the Thanksgiving holiday. All the drama will resume the week of November 28 – Dec. 2 when everything goes back to its regular schedule.

Scott Baldwin (Kin Shiner) will get an unexpected call, will Lucy Coe (Lynn Herring) reach out for help? Holly lands on Victor’s bad side which is never a good thing. Brooke Lynn Quartermaine (Amanda Setton) will have to face the music when Harrison Chase (Josh Swickard) confronts her about sabotaging his career. Chase may also catch up with Sasha Gilmore (Sofia Mattsson) as well.

Dante Falconeri (Dominic Zamprogna) will question Heather Webber before dealing with Sam McCall’s (Kelly Monaco) concerns. Sam wants to know what Cody Bell (Josh Kelly) keeps hinting at. Will Josslyn Jacks (Eden McCoy) confide her feelings for Dex to Carly? Josslyn remains drawn to Dex even if she tries to stop it. Spencer Cassadine (Nicholas Chavez) will turn down a reunion with his father, Nikolas Cassadine (Marcus Coloma).

In other spoilers, Nina and Willow will argue again. Willow will end up having to go to the hospital. Drew will get a lead in Willow’s birth parents’ search soon. Valentin will need a favor from Sonny, will they set up a surprise for Anna Devane (Finola Hughes)?

The Young And The Restless Spoilers: A New Beginning For Daniel And Lily?

Y&R Spoilers: Abby’s Move To Win Chance Back, Devon Refuses To Be Erased?