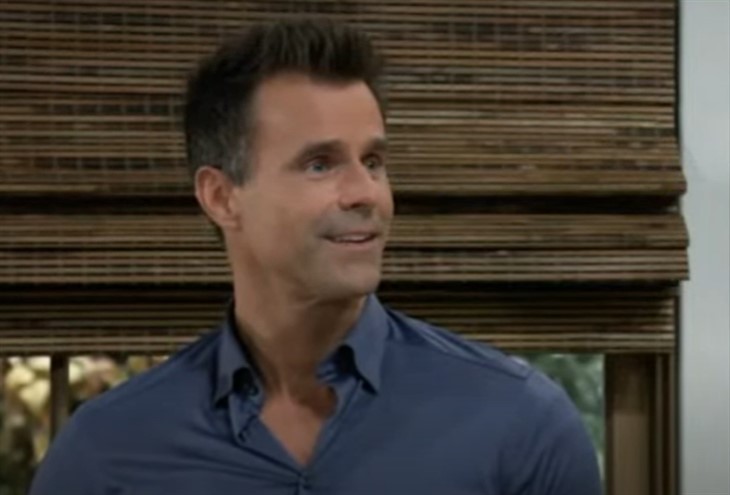 General Hospital viewers will recall that Laura Collins (Genie Francis) is determined to get to the bottom of what Victor Cassadine (Charles Shaughnessy) is up to! Last week she started working on a plan and getting a team together to find out.

General Hospital viewers see Drew Cain (Cameron Mathison) confer, likely with Laura, about Victor – he says they have to find out what his objective is. Previously, Anna Devane (Finola Hughes) told Drew to watch his back because she sensed impending danger; viewers will recall that indeed Victor is after Drew’s old memories because they hold something he wants – now just to figure out what!

Viewers know that may be easier said than done since Drew’s memories were downloaded into the late Franco Baldwin (Roger Howarth) and then removed by Dr. Andre Maddox (Anthony Montgomery)!

General Hospital viewers will recall that Ava seems to be the problem between Nikolas Cassadine (Marcus Coloma) and his son, and Nikolas having given Ava the purse strings to control Spencer’s trust fund isn’t helping! Meanwhile, Maxie Jones (Kirsten Storms) has shown up for the first time since returning to Port Charles to talk to Britt Westbourne (Kelly Thiebaud).

It’s a kind of family reunion for Britt as Maxie asks for her forgiveness, “speaking of secrets” – that’s likely the secret that she hid Bailey Louise Jones (London and Jett Prinzo-Berendt) in plain sight for nearly a year without letting Aunt Britt in the loop!

General Hospital viewers will recall that Esme first uploaded it to the computer system in the Port Charles University, but now it sounds like it’s gotten to the world wide web, as Esme mentioned when confronted!

Cam and Joss knew it was Esme even though of course she tried to lie her way out of it, pointing the finger at Trina Robinson (Sydney Mikayla)! Viewers will recall that Esme appeared to have switched cell phones at Kelly’s recently when Trina left hers on the table! Josslyn is horrified when she exclaims to Cam, “Have we gone viral?!”

General Hospital viewers will see Nikolas and Spencer talk and begin trying to repair their father-son relationship in Tuesday’s General Hospital. Spencer tells his father that he can thank Spencer’s better angels for a change of heart – undoubtedly referring to his visit to his late mother’s grave, Courtney Matthews (Alicia Leigh Willis).

Longtime viewers of General Hospital can recall when Courtney would appear to little Spencer, with an angelic presence – it looks like this visit to his mother’s grave in person after many years has put Spencer to thinking. Perhaps father and son will be able to have new beginnings with each other as they talk and try to work things out!

General Hospital viewers will recall at the end of Monday’s General Hospital, that Trina stepped into the classroom where Joss and Cam were confronting Esme over the sex tape. Esme denied culpability and pointed to her rival for Spencer’s affections, Trina as the culprit who made Joss and Cam famous for all the wrong reasons!

Apparently the word “dysfunctional” comes up in their argument as Trina lets Esme have it, and then some! Trina gets in her face and doesn’t mince words as she confronts her, asking her who in the h-e-double hockey sticks is she calling dysfunctional!

Trina then has a choice name of her own as she calls Esme a conniving – well, you know; fill in the blank!

The Bold And The Beautiful (B&B) Spoilers: Sheila Gives Thomas An Earful