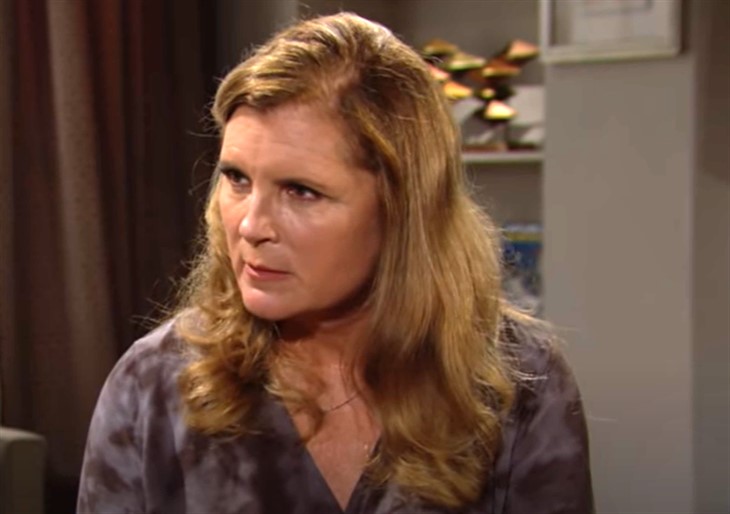 Sheila is sorry for having shot Taylor in daytime days gone by. Her remorse is genuine because it is coupled with a recognition of Taylor’s genuine second-chance offer.

Taylor was upfront with Sheila, telling her during one of their initial meetings that she wanted to give her a chance to prove that she has reformed. But Taylor’s consideration for the woman who once was her violent assailant will be severely tested in the coming days.

What type of legal crime was committed by switching the label on a bottle of champagne that Brooke believed was non-alcoholic?

Brooke is a known alcoholic. So, there must be various criminal statutes that could be reviewed by various attorneys in this edition of Los Angeles, California.

However, there is no need to research the moral crime Sheila committed. She sought revenge because Brooke refused to adopt the same outlook Taylor has.

Brooke was cruel when telling Sheila that she saw her as a threat to the Forrester and Finnegan families. Brooke claimed she is protecting Steffy Forrester Finnegan (Jacqueline MacInnes Wood), and her grandson, Hayes Forrester Finnegan (Samantha Worden and Piper Harriet), from Sheila. That outraged B&B’s all-time leading villain.

Thomas could confide what Sheila told him about the incident in question. He could go to Taylor and tell her the whole sordid story.

Taylor will be faced with a deep moral dilemma if the above happens. If she tells Ridge about this reveal, then he would see Brooke as Sheila’s victim. That would create the possibility of Ridge changing his now-hardened stance on Brooke’s recent actions with Deacon.

The Bold And The Beautiful Spoilers – Taylor Hayes Better Off Not Knowing?

Before the Sheila reveal happens, assuming that it does in some form and with however many characters learn it, Taylor towers over Brooke. Ridge is in the process of reconciling with his other great love.

Taylor is proceeding with intense caution because she does not want her heart broken again. She also realizes that Ridge needs time to process his feelings about Brooke and then make a clear, stand-alone decision about Taylor.

Thomas can keep this information from his mother so that she is not compromised. Whether he tells his father is a different calculation.

90 Day Fiancé Updates: Natalie Reveals Where Her Mom Is Amid Ukraine Crisis