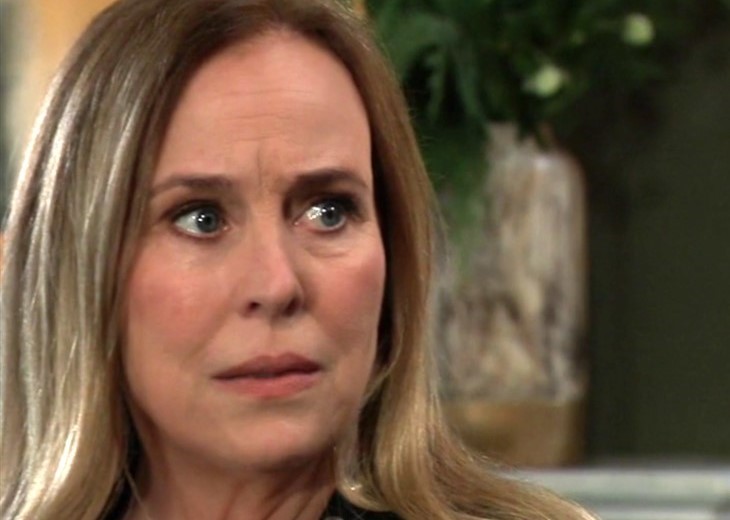 Outside a meeting room at GH, Kevin Collins (Jon Lindstrom) comforts his frightened wife and tells her she doesn’t need a tidal wave of votes to know that she’s loved!

A powerful political opponent has surfaced to attack Laura and her mayoral position, and Alexis Davis (Nancy Lee Grahn) called to tell her that something catastrophic was going to happen!

Laura had told Kevin she was so nervous she was feeling sick, and he tries his best to reassure her as readies to take her through the door.

Kevin tells Laura as he looks her in the eye that one of those people who loves her is looking her in the eye! Laura tells Kevin not to make her cry, it’s a bad look, and he tells her there’s no such thing!

GH Spoilers – Welcome To The Meeting To Save Your Hide

Inside the door of the meeting room, Laura greets those who are gathered, which are many influential people of Port Charles – Scott Baldwin (Kin Shriner) for one.

It seems appropriate that Scotty is leading the committee to “save her hide” considering he’s saved her hide several times in the past! He even literally buried a body and hid her involvement in killing one of Rick Webber’s (Chris Robinson) mistresses!

At The Savoy, Curtis has another issue to deal with, considering it’s doubtful that Selina Wu (Lydia Look) is concerned at all about the mayor of Port Charles! However, Sonny Corinthos (Maurice Benard) would definitely want to be part of that committee to save Laura’s hide if he could, going back years as a friend to Laura!

However, he may be talking to Sonny about Laura’s dilemma as well as problems that Selina and Sonny are having with their businesses thanks to Michael Corinthos (Chad Duell)!

Sonny already knows Michael is pulling those strings, but Curtis tells him when they get back they can figure out who’s pulling the strings; obviously it’s a different set of strings!

GH Spoilers – You Never Know – That Could Be A Dead Woman Walking!

At General Hospital, Portia Robinson (Brook Kerr) and Britt Westbourne (Kelly Thiebaud) watch as Laura walks by to get on the elevator, likely after the meeting to save her hide! Britt shows her concern by her observation to Portia as she says “you never know, that could be a dead woman walking!”

This obviously is not only a threat to Laura’s mayoral position but quite possibly to her life; this political opponent appears to be someone from her past. Perhaps the opponent knows something about the covered-up murder of Theresa Carter (Alicia Arden), the crime Scotty covered up, or of David Hamilton (Jerry Ayres) although both were ruled accidental.

These were very long ago, when Laura was a teenager – even before her marriage to Luke Spencer (Anthony Geary)!

General Hospital Spoilers – How Long Have You Been Waiting To Settle The Score?

After Laura steps off that elevator the opponent is revealed – and it’s obviously someone from her past who has a score to settle! She asks the person exactly that – how long has he or she been waiting to settle the score?

It sounds like this old enemy has at least partially chosen the power of the pen over the sword or the catastrophic information wouldn’t have landed on Alexis’ desk at The Invader!

Alexis had wanted obviously to quash the exposé but had told Laura on the phone that she wasn’t able to. Now Laura must deal with her enemy one on one, although her reinforcements are near and ready to stand by her side in her battle!

Y&R Comings And Goings: Phyllis Comes Back, A Man Eater Eyes Her Prey