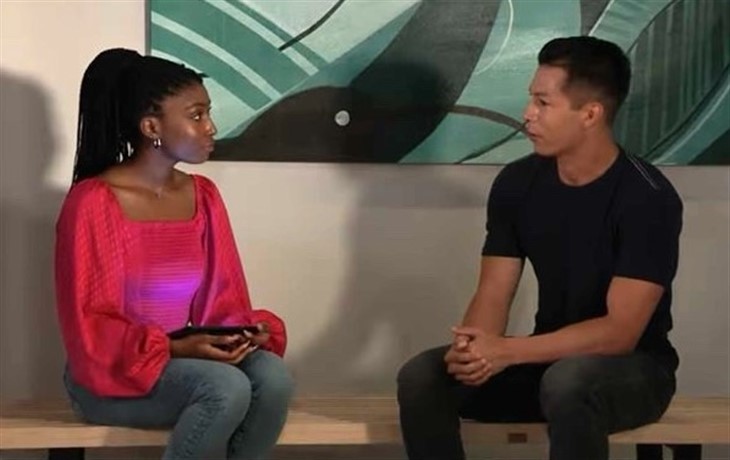 General Hospital (GH) spoilers for Thursday, May 26 tease there are tempting trials and tribulations for all the players in Port Charles on the next GH!

Officer Rory Cabrera (Michael Blake Kruse) is paying a visit to Trina Robinson (Tabyana Ali) at the Jerome Art Gallery; he’s a rookie, but he’s going the second mile! He tells her that the first wrong he is planning on righting is the wrong that is being inflicted on her. He knew she was being framed, as the rest of the PCPD does, from that first soda he brought her in the interrogation room!

Trina has indeed been framed, by Spencer Cassadine’s (Nicholas Chavez) “awful girlfriend” as her mother Portia Robinson (Brook Kerr) referred to her recently. Esme Prince (Avery Kristen Pohl) plotted and planned to frame her from the moment she drugged her and set up that video to record!

GH Spoilers – She’s Going To Find A Way To Stop Her!

Not only has Esme done that, she’s also gotten Trina in trouble with Port Charles University, a title nine report having been sent to her. That means Trina is being expelled and banned form the campus; and Joss and Cam are still having weirdos stalking them.

General Hospital Spoilers – We Are Having To Pack

Spencer, in the meanwhile, is at Wyndemere Castle telling Esme Ava Cassadine’s (Maura West) conditions for him to receive $10,000 a week as an allowance from his trust fund. The main condition is that he and Esme move out of the castle and stay out, and she’s not going to like that.

He’ll probably be able to find them a place with two separate bedrooms but Esme was tasked with seducing his father Nikolas Cassadine (Marcus Coloma).

Living outside Wyndemere will make it more difficult for Esme to get into Nikolas’ pants and break him and Ava up. Spencer tells her they have to spend the afternoon packing but she’ll probably find a way to get to Nikolas anyway or risk defying her father, Ryan Chamberlain (Jon Lindstrom).

Nikolas is at General Hospital trying to get information he’s not entitled to from Dr. Britt Westbourne (Kelly Thiebaud). Somehow Nikolas has found out that Elizabeth Baldwin (Rebecca Herbst) has decided to go to Shadybrook for some therapy and he wants the details!

Perhaps he thinks Esme is the one who has been stalking her and gaslighting her with Franco Baldwin (Roger Howarth) related “hauntings” and hit Harrison Chase (Josh Swickard) over the head? That might be one way to get Esme in jail but it wouldn’t help Trina! Britt and Dr. Terry Randolph (Cassandra James) team up and “just say no” to Nikolas!

Victor Cassadine (Charles Shaughnessy) has returned to Port Charles and tries to charm his favorite in-law at the Metro Court Restaurant Bar! He spies Ava sitting and nursing a martini, her favorite activity, and asks her isn’t there a welcome home for her favorite in-law?

She does seem to be smiling a bit flirtatiously and viewers might wonder is she being tempted by the older Cassadine away from Nikolas?

Victor has been away from Port Charles for several weeks, but the question is what was he doing and where was he? He has some catching up to do but is someone trying to catch up to him?

GH Spoilers – We’re Supposed To Trust Your Judgment About This?

Sonny Corinthos (Maurice Benard) takes the stand on Nina Reeves’ (Cynthia Watros) behalf at the Port Charles Courthouse during her visitation hearing. Usually, Attorney Diane Miller (Carolyn Hennesy) is on his side, but not this time! She wants to know why they should trust his judgment about Nina and her right to see Wiley Corinthos (Viron Weaver)!

Both Nina and Carly Corinthos (Laura Wright) have eyes on him, Carly disgusted, Nina worried. Sonny will finally reveal that as “Mike” in Nixon Falls, he really didn’t care about finding out who he was anyway so Nina finding him didn’t make lots of difference!