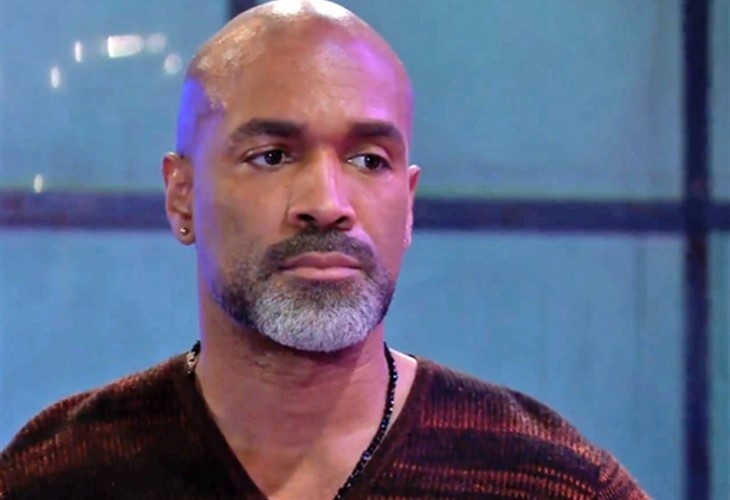 General Hospital (GH) spoilers for Monday, May 16 tease truths will be concealed and lies will be revealed on the next GH!

General Hospital Spoilers – Why Did You Lie To Me?

Curtis Ashford (Donnell Turner) is disappointed in his auntie Stella Henry (Vernee Watson) when she admits what she knew about Marshall Ashford (Robert Gossett).

Viewers have always suspected that Stella knew more about Marshall and his past than she was admitting, and now they and Curtis find out what she knew! Curtis wants to know from Stella why she lied to him, so not only did she conceal truths she also told lies.

Stella has a lot of explaining to do to Curtis about why she lied about things she knew about the missing Marshall. What else might she have been hiding, and maybe still is hiding; will those truths be revealed also?

GH Spoilers – Dealing With Nikolas Cassadine Is My Job!

At Kelly’s, Ava Cassadine (Maura West) is sitting at a table talking with Trina Robinson (Tabyana Ali) and they’re talking about Nikolas Cassadine (Marcus Coloma). It sounds like they are discussing the situation at Wyndemere Castle with Esme Prince (Avery Kristen Pohl) still living there, along with Spencer Cassadine (Nicholas Chavez).

Ava cancelled her vow renewal with Nikolas and now they have been sleeping in separate bedrooms over the Esme situation; Ava tells Trina dealing with Nikolas is her job!

Ava is on Trina’s side and believes Esme set her up and framed her for the criminal charges she is facing. Later, Trina will bring some disheartening news to Ava and her mother Portia Robinson (Brook Kerr).

General Hospital Spoilers – You Do Your Part, Deal?

At the Port Charles elementary school fair Harrison Chase (Josh Swickard) shows up to see Leo Quartermaine (Easton Rocket Sweda) read his poem. It sounds like Chase is trying to get Leo over a little stage fright he may be having, as he tells him to do his part, deal?

Leo will later remind Chase of a promise he made to him also, and this could be what they are discussing, wanting to make sure he held up his part.

Leo is autistic and sometimes has meltdowns so this performance could be very stressing for him, in spite of his whole family and Chase supporting him. Chase is being a good encourager by telling him to do his part!

GH Spoilers – Why Am I Just Learning This?

Felicia Scorpio (Kristina Wagner) and Anna Devane (Finola Hughes) are having lunch together and catching up on each other’s lives. Anna’s relationship with Valentin Cassadine (James Patrick Stuart) comes up and Felicia wants to know why is she just learning this?

Valentin had been less than attentive to Anna ever since he was recovering from an infection, but really was on a caper involving the Ice Princess in French Polynesia! He had some close calls around both Felicia and Anna when they were there and he was “Captain Francois Olivier”!

Later, Felicia will call Valentin out and demand what his intentions are towards Anna!

General Hospital Spoilers – It Must Be My Lucky Day

Next, Valentin is telling someone it must be his lucky day, and he may decide it’s not so lucky after all. This likely is going to be Felicia arriving to ream him out for taking Anna for granted and wanting to know if he’s playing her!

Felicia is overreaching just a tad, since after all she’s not Anna’s father and Anna is a grown woman, but she cares about her friend and looks out for her.

Viewers know that Felicia can be fierce, especially when she’s in Mama Bear mode, in which she seems to be concerning Anna. Valentin had better come up with some good answers that make sense or he won’t know what hit him!

GH Spoilers – I Have A Giant Surprise For You

Esme is at Wyndemere Castle obviously playing Spencer, telling him she has a giant surprise for him!

Considering her previous conversation with daddy dearest Ryan Chamberlain (Jon Lindstrom) who told her to get on with seducing Nikolas, that surprise might be a real doozy!

After a disappointing encounter with Spencer, she’ll move on to manipulating Nikolas! What Esme doesn’t know is that Spencer will have a giant surprise for her too, once he gets the evidence to exonerate Trina!

General Hospital Spoilers – I Have A Proposition For You

While Spencer is told Esme has a surprise for him, Drew Cain (Cameron Mathison) tells Ned Quartermaine (Wally Kurth) he has a proposition for him! They are still at the Port Charles Elementary School fair when Drew offers Ned a position with the newly merged Aurora Media/ELQ. Ned will be disappointed at the position he’s offered, which won’t be nearly as prestigious as the one he had, CEO of ELQ!

Ned will have to think about that before he gives Drew an answer, meanwhile stewing inside getting ready to boil over! He’ll be ripe for the picking by the time Valentin makes him an offer later in the week!

GH Spoilers – Is That Code For Watch Your Back?

Dante Falconeri (Dominic Zamprogna) has some advice for his father Sonny Corinthos (Maurice Benard) after having tried to make peace between him and Michael Corinthos (Chad Duell).

Previous General Hospital episodes revealed Michael wasn’t buying anything Dante was selling, and he’s determined to keep Sonny cut off! Sonny had tried to lend support to Michael in the upcoming visitation case where Nina Reeves (Cynthia Watros) is taking him and Willow Tait (Katelyn MacMullen) to court.

Dante gives him a warning, likely about Michael’s anger, and Sonny asks if that’s code for “watch your back”!

The Bold and the Beautiful (B&B) Spoilers: Sheila Is Cornered From All Sides