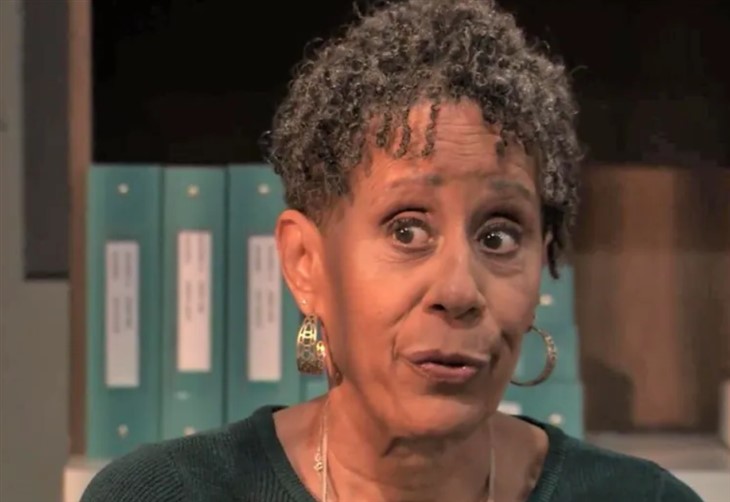 General Hospital’s Stella Henry (Vernee Watson) has been keeping a secret about Marshall Ashford (Robert Gossett) for years. Could Stella’s secret be that she and not her sister is Curtis Ashford’s (Donnell Turner) mother?

Did Stella have an affair with her brother-in-law years ago?

General Hospital’s Stella has been covering for Marshall Ashford for decades. Marshall just up and walked away from his family. Stella stayed with her sister to help raise the boys, but could Curtis belong to Stella instead? Stella has always been very protective of Curtis since the first day she came to town.

Stella has never acted like Curtis’s aunt but more like his mother. Stella feels like she has the right to but into every aspect of Curtis’ life. Is Stella too involved to just be an aunt? Did Marshall do something more to turn Stella against him years ago? Stella is obviously trying to hide something and Curtis wants answers. Is Curtis prepared for the answers he may get?

GH Spoilers – Marshall Ashford Wants To Keep His Past Hidden

General Hospital spoilers indicate Curtis knows that Marsh is trying to keep his past hidden. Marshall has left town to keep Curtis from pressing him about the truth. It seems that Marshall has experienced some mental health issues but is that all? Marshall has kept up with his family through someone and that seems to be Stella. What else has gone on between Stella and Marshall in the past? Curtis thought he had things figured out about Marshall but maybe there is more than meets the eye.

General Hospital’s Curtis thought that Marshall may have been in the mob at one point. However, it doesn’t seem like it was the case after the arrest record was exposed. Curtis tried to get along with Marshall as best he could. Marshall didn’t like Curtis prying into his business.

Marshall still doesn’t want anything to do with Curtis since he has gone behind his back for this information. Marshall does want to connect with T.J. Ashford (Tajh Bellows) who is not even his grandson. Why is Marshall pushing for a relationship with T.J.?

Stella and Marshall seem to have some very deep secrets. Will the truth about Marshall and Stella’s relationship ever come out? Will Curtis’ world be turned upside down once again by the father he really never knew? Could

Curtis’ relationship with Stella be ruined as well?

Y&R Spoilers: Sharon’s Last Trip With Husband – Why Was Rey’s Memorial Not Shown?