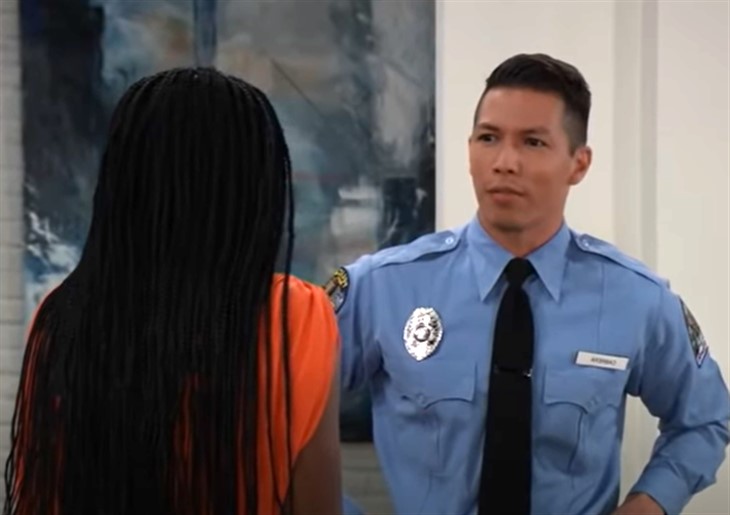 General Hospital (GH) spoilers and updates for Friday, May 27 tease compromises, confrontations and conflict on the next episode of GH!

At the rooftop Metro Court Pool, Rory Cabrera (Michael Blake Kruse) has talked Trina Robinson (Tabyana Ali) into a pool date! Rory could have been accused of perhaps trying a little too hard to convince her while they were still at the Jerome Art Gallery, but he is persistent!

Trina initially turned him down, since as a cop’s daughter she knows dating a suspect in a crime can be a conflict of interest.

Trina obviously was convinced by the persistent patrolman, because now they’re in swimsuits at the pool, although she may be calling it “friends.” She seems glad that she compromised as Rory smiles at her and tells her, “what can I say-I’m an optimist!”

GH Spoilers – I May Not Be Here When You Get Back!

At Wyndemere Castle, Spencer Cassadine (Nicholas Chavez) and Esme Prince (Avery Kristen Pohl) are obviously in an intense confrontation! Spencer had told Esme that they needed to pack all day when she wanted him to go on a picnic. This was after he had informed her Ava Cassadine (Maura West) was giving him $10,000 a week allowance from his trust fund.

Esme obviously doesn’t want to leave the castle where she has access to his father, and hisses that she might not be here when Nicholas gets back! After all, moving away from the castle will severely hamper her attempt to go by the seduction plan that dear old demented daddy Ryan Chamberlain (Jon Lindstrom) gave her!

General Hospital Spoilers – If There’s A Choice To Make It’s Mine!

Spencer and Esme are not the only ones in a confrontation as Ava and Nikolas Cassadine (Marcus Coloma) argue at The Metro Court! Ava gets in Nikolas’ face over a table and hisses if there’s a choice to make it’s her choice, and it is probably over the state of their marriage.

Even if Esme does choose to move out with Spencer, the damage may have been done between Ava and Nikolas.

Obviously the couple must be getting some attention with their fight! Someone soon comes over to try and intervene!

Victor Cassadine (Charles Shaughnessy) finds it necessary to chaperone the couple as he tells Ava and Nikolas it’s time they found some compromise! Victor had been talking to Ava previously up at the bar where he asked if she had a welcome home for her favorite in-law!

They had talked about the latest news, such as Jennifer Smith (Holly Gagnier) being charged with the murder of Luke Spencer (Anthony Geary). Victor played dumb as he thought it was an accident – actually one he himself had arranged!

But now he’s back in Port Charles still trying to get his family to become a united front, one couple at a time!

Attorney Scott Baldwin (Kin Shriner) probably didn’t help his client’s case when he antagonized Michael on the stand bringing up his murder of his stepmother Claudia Zacchara (Sarah Joy Brown)!

Now Diane asks Michael to clarify that he doesn’t want Nina to have ANY contact with Wiley! Michael obviously is going to confirm that in the courtroom!

GH Spoilers – I Did What I Had To Do!

A clearly conflicted Nina is in tears as she explains something to Sonny Corinthos (Maurice Benard). Nina says she did what she had to do, and it could be in answer to Sonny’s question about putting Ava into labor and kidnapping Avery Jerome-Corinthos (Ava and Grace Scarola).

At the time, Nina probably did feel that way with Ava being still tied to the mob at the time although back then it was clearly for revenge. There is a possibility that she’s answering Sonny about a more recent situation, however since he looks at her with understanding.