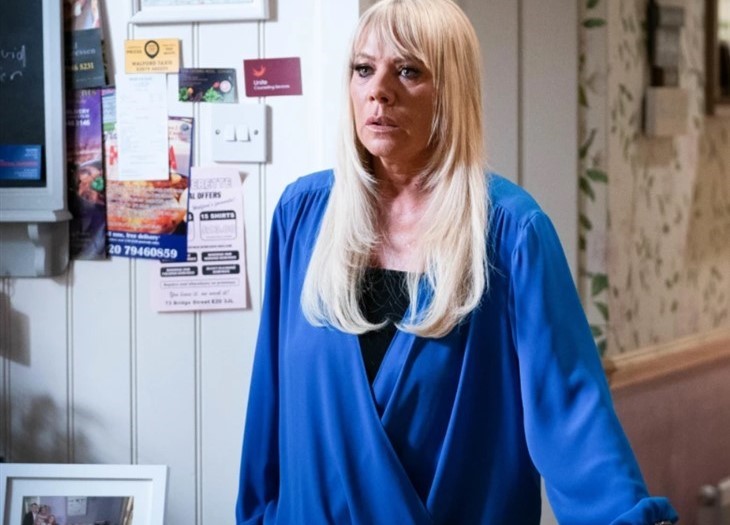 EastEnders spoilers and updates tease that Sharon Watts (Letitia Dean) won’t just stand idly by and let Phil Mitchell (Steve McFadden) marry Kat Slater (Jessie Wallace). She’ll do everything she can to stop their nuptials. What is she up to?

Sharon and Phil have been apart for a long time. But she was forced to reevaluate her feelings for him when Phil had a near-death experience. Now, she vowed to do something to prevent Phil from tying the knot with Kat.

In upcoming scenes, Kat will start to doubt if she really wants to become Mrs. Mitchell after a comment from Shirley Carter (Linda Henry). Kat will get cold feet but her worries will soon be put to rest after talking to Stacey Slater (Lacey Turner).

What she doesn’t know is that someone is lurking in the background, trying to find a way to stop her wedding. Zack wants to win Phil back and after some encouragement from Zack Hudson (James Farrar), she hands Phil an old photo of them together as she tries to convince him that they’re meant for each other.

Sharon’s hope of getting back with Phil will be crushed when he rejects her advances and plans to marry Kat. Meanwhile, Zach mishears Phil and Sharon’s conversation and assumes that Phil has decided to get back with her.

He immediately tells Kat about it and the latter confronts Phil about it. Phil will assure her that it’s not true and that he intends to marry her. But Kat won’t let it go and will lash out at Sharon.

Later on, Sharon will realize that Kat hasn’t shown up at her wedding because of some problems with her ex-husband, Alfie Moon (Shane Richie). Her former lover doesn’t approve of her marriage with Phil and tries to convince her not to go through with it.

Phil will anxiously wait for his bride and continue to wonder what happened to her. As for Sharon, she’ll come up to Phil and try to persuade him for the last time to get back with her. Alfie tries to reunite with his ex-wife while Sharon does the same with her ex-husband. Will they get what they want?

Meanwhile, Richie was happy to get the opportunity to reprise his role on EastEnders. He shared that the new executive producer Chris Clenshaw was instrumental in bringing his alter ego back.