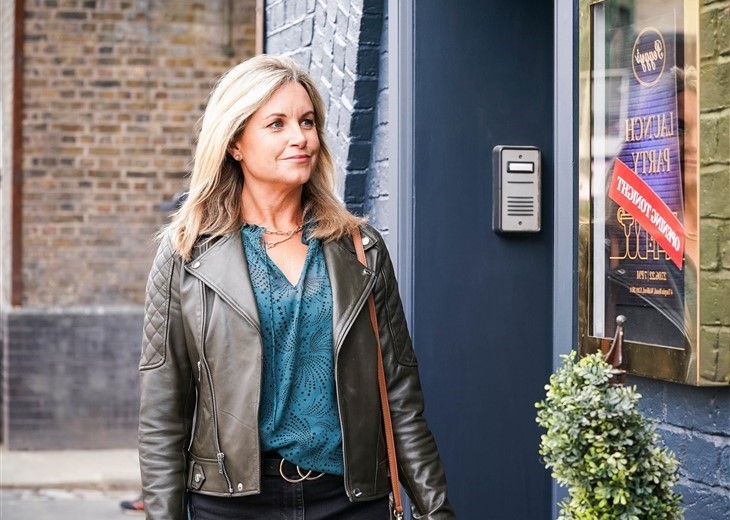 EastEnders spoilers and updates tease that Sam Mitchell’s (Kim Medcalf) plot against his brother Phil Mitchell (Steve McFadden), will be revealed. Her schemes will be exposed as her nephew Ben continues to struggle with his own demons.

Fans may recall that Ben turned to drugs as his way of coping after he was sexually assaulted by Lewis Butler (Aiden O’Callaghan). Ben joins Sam in her scheme, which involves working with Jonah Tyler (Mark Mooney) as he sells drugs in Peggy’s while she takes a cut.

Ben’s loved ones grow more concerned with Ben. Kathy Beale (Gillian Taylforth) is left furious when she learns that he spent the night with James McIntyre (Anto Sharp). She reminds Ben about Lexi’s exam and the family meal, which was scheduled for later in the day.

Unfortunately, Ben shows up late, leaving Lexi distraught and missing her old dad. Ben isn’t having any of it and snaps at Lexi. Sam catches Ben taking drugs once again and tells him to keep his act together.

But Ben isn’t in the mood to listen to any advice. He continues his downward spiral and takes more drugs. He remembers the family dinner and leaves an emotional voicemail for Lexi. Ben suddenly collapses on his way home.

Lexi is left distraught when Ben is a no-show at the family meal. But Jay Brown (Jamie Borthwick) and Callum Highway (Tony Clay) immediately notice that something’s wrong after hearing Ben’s voicemail.

Ben is rushed to the hospital after finding him unconscious and without a pulse. Sharon Watts (Letitia Dean) immediately becomes suspicious when she learns what happened. She thinks Zack is keeping something from her so she presses him for answers.

Sharon tells Phil that Sam knew about Ben’s drug problem and she just let it happen. Phil calls Sam, but the latter continues to ignore him. She remains clueless that Zack already told someone about the drugs when she told him to keep quiet.

Sam warns Jonah to stop the drug deals in Peggy’s as she fears that her scheme is about to get exposed. She then faces Phil’s fury when he confronts her about the drugs?

Will Phil find out that Sam has been working with the Mitchells’ worst enemy? What does this mean for Sam? How will Jonah react when Sam tells him to stop his drug deals at the nightclub?

B&B Spoilers: Steffy Longs For Finn As He’s On His Way