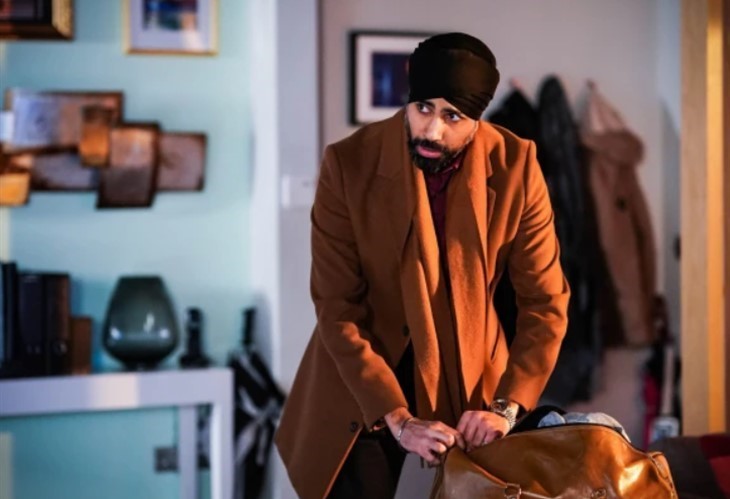 Eastenders spoilers reveal that Kheerat Panesar (Jaz Deol) was tricked into meeting with Gray Atkins (Toby-Alexander Smith). Kheerat was being strangled by Gray when he got the upper hand. Kheerat ended up hitting Gray with a bottle, which caused him to collapse with blood running from his head. Kheerat has gone on the run, but could Gray still be alive?

Eastenders spoilers reveal that fans have been waiting a long time for Gray to be exposed. Not only did Gray cause the death of Chantelle Atkins (Jessica Plummer), but abused her in every way imaginable. There were times when fans weren’t sure if Chantelle would survive. Just when she made the decision to leave, Gray dragged her home again. It would be the last time anyone saw Chantelle alive again.

This week, fans watched as Gray made a desperate attempt to meet up with Kheerat. Thinking Gray was going to confess, Kheerat went to meet the killer. However, it was a set up and Kheerat soon found himself fighting for his life. Gray ended up strangling Kheerat and fans wondered if the killer would eliminate another person who could nail him for murder.

Eastenders spoilers reveal that Kheerat ended up taking a bottle and hitting Gray on the head. Gray collapsed to the ground and was lifeless with blood rushing from his skull. Kheerat didn’t know if the man was dead or alive. He also didn’t have much time to find out or make an action plan.

Chelsea Atkins (Zaraah Abrahams) walked in and called emergency services for help. On the phone, Chelsea named Kheerat as the attacker. With the police hot on his trail, Kheerat got some help from Stacey Slater (Lacey Turner). When Tuesday’s episode ended, Kheerat went on the run as police searched Suki Panesar’s (Balvinder Sopal) house.

Fans are livid that Gray could be dead. Fans want him to suffer and pay the price for everything that he’s done. A clue was dropped in Tuesday’s episode, though. When the police questioned Stacey, they said Gray was “viciously attacked.” They said nothing about a murder or even a death.

Make no mistake… fans want Gray to be punished. However, many find that death would be too easy, especially after everything he’s done. So, Gray could still be alive. However, what does that mean for Kheerat? So far, there is no news of Deol leaving the soap. So, Kheerat going on the run could be short-lived. Keep watching the BBC soap to see what happens next.

The Young And The Restless Comings And Goings: Jack’s Granddaughter Cast?