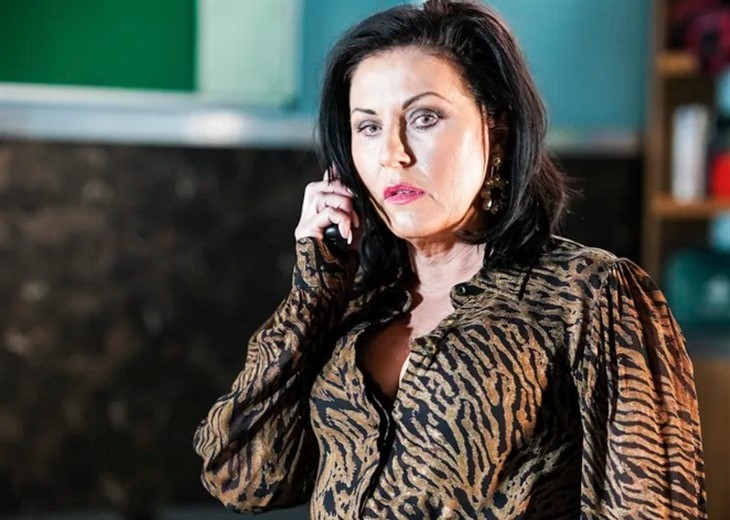 EastEnders spoilers and updates tease that Jessie Wallace was arrested early Sunday morning after allegedly assaulting a police officer. The actress, who plays Kat Slater on the show, was released without charge but was issued a conditional caution.

The incident took place at around 2 am on Sunday outside the Verve nightclub in Bury St Edmunds, Suffolk. According to a police spokesperson, Slater was arrested on suspicion of attacking a police officer and drunk and disorderly conduct.

A witness to the incident said that the actress was drunk and irate. She started shouting and cursing at the police officers. One of them warned Slater that she’ll get arrested if she swears again. She didn’t heed the warning and was later on arrested.

“A 50-year-old woman was arrested early on Sunday morning in St Andrew’s Street, Bury St Edmunds, on suspicion of assaulting a police officer / drunk and disorderly conduct and was released without charge after receiving a conditional caution,” as per a Suffolk police spokesperson.

To accept the conditional caution, the actress may have been asked to sign a document that explains what she did and confirms she committed the offense. Even though she wasn’t charged and conditioned, the incident would be recorded on the Police National Computer.

This isn’t Slater’s first brush with the authorities. In 2003, she was fined £1,000 and banned from the road for three years after getting caught drunk driving. She had a similar punishment a few years back and was not allowed to drive for 15 months after failing to take a breathalyzer test.

It was revealed that BBC executives only learned about it when news broke out about Slater’s arrest. They immediately convened a meeting so they could “get to the bottom of things.”

According to a source, BBC executives have talked to Slater about the incident and gave her a “clear warning.” They pointed out that her behavior was unacceptable. Slater reportedly regretted her actions.

Slater is currently involved in a major storyline as her character does everything she can to take full control of the Mitchell’s business. She’ll find herself in a dangerous situation next week when two armed men rob Peggy’s nightclub.

Sam Mitchell (Danniella Westbrook), Shirley Carter (Linda Henry), and Sharon Watt’s (Letitia Dean) lives will also be put at risk. Sam will be forced to lead the gunmen into the club’s safe. Things get out of control when someone gets shot.