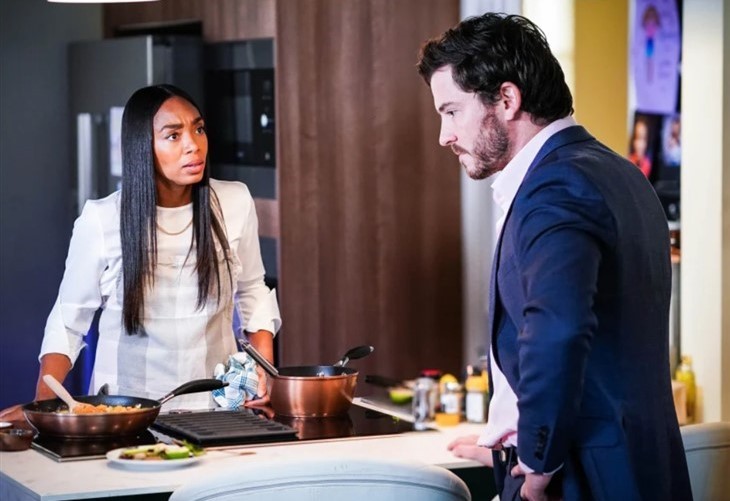 EastEnders spoilers and updates tease that Chelsea Fox (Zaraah Abrahams) will confront Gray Atkins Atkins (Toby-Alexander Smith) over his manipulations and lies. But she wants to catch him on the act so she’ll continue her pretense, at least for now.

In the episode that aired on January 7, fans know that Denise Fox (Diane Parish) invited Gray and Chelsea for dinner. But Gray took advantage of the situation so that he could keep her away from her family. Chelsea was desperate to get away from her killer husband, so she turned to Whitney Dean (Shona McGarty). However, Gray found the two women talking.

Fans may recall that Whitney found out that Gray had something to do with Chantelle Atkin’s (Jessica Plummer) death during the holiday season. She wanted to stop Chelsea from marrying him so she told her everything she knew.

But Chelsea didn’t believe Whitney that time and went on to marry Gray. However, she, later on, found out that Whitney was correct and that he married a killer. She asked Whitney for help to flee Walford during Boxing Day. However, Gray knew what they were up to and found a way to stop her. Not only that, Chelsea gave birth to her son with Gray, Jordan.

Whitney is shocked when she learns that Chelsea is still with Gray. But Chelsea defends herself and says that she knows what Gray is capable of. She just needs some time and when Jordan is well, they can both leave town for good.

Gray appears while Whitney and Chelsea were engaged in a serious conversation. His appearance startles them both. Chelsea tries to make sure that Gray won’t learn about her plan so she grabs a drink and throws it in Whitney’s face. She hopes that it would be enough to convince Gray that she doesn’t believe whatever it is that Whitney’s trying to tell her.

Will Gray fall for Chelsea’s drama or will he see through her plan? If Gray manages to learn what she’s up to, will she be his next victim?

Chelsea will also confront Denise in scenes set to air next week. She’ll make it clear that she’s not impressed with her dinner plans, given that Jordan is still in the hospital. Denise defends herself and says Gray told them to give her space. Chelsea confronts Gray but he tries to lie his way out by saying that it was just a matter of misunderstanding.