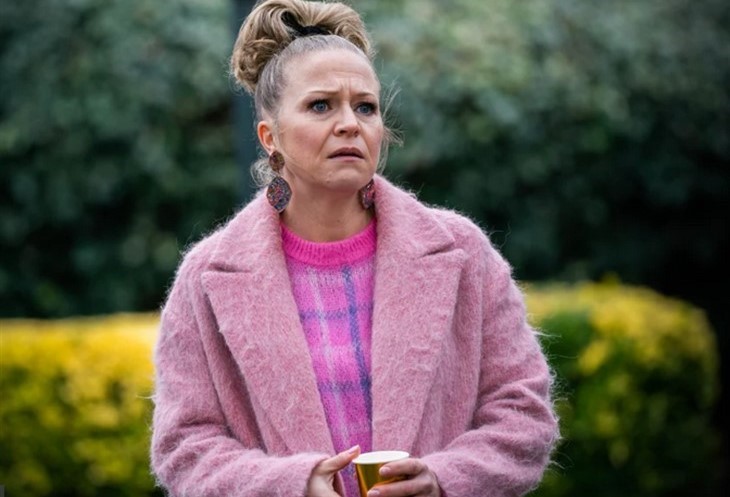 EastEnders spoilers and updates tease that Linda Carter (Kellie Bright) will set her eyes on a new business venture after Janine Butcher (Charlie Brooks) failed to force the former out of Walford. She may use the money she got from Janine to make the investment.

Fans may recall that Janine offered Linda £25,000 to leave Walford. The bribe became £50,000, and Linda agreed to take the offer. The latter truly considered taking the money, but she decided not to, at the very last minute.

Instead of just saying no, Linda turned the tables on Janine by saying that she’s not leaving Walford and she’ll be keeping the money for herself.

In upcoming scenes, Denise Fox (Diane Parish) plans to sell the salon to Nathan (Jamie Knox). She’ll the news to Lola Pearce (Danielle Harold) and Jada Lennox (Kelsey Calladine-Smith). Kim (Tameka Empson) and Denise will talk about the latter’s decision and the need to look for an investor. Linda overhears their conversation and later on offers to invest in the salon.

Kim and Denise will be surprised to learn that Linda is ready to invest £50,000. Jack Branning (Scott Maslen) has doubts about Linda’s investment at first, but at the end of the day, Linda signs the contract, sealing the agreement that she’s now the new co-owner of the salon. The Carters will celebrate Linda’s new business venture. However, their celebration will be cut short when Nancy learns that the estate agents never received the money they paid as a deposit for the restaurant establishment.

It won’t take long for Linda to put things together and realize that Janine may have a hand in all this. Linda confronts her and threatens to tell Nancy what she’s done. Later on, Linda talks to Denise and asks if she can withdraw her investment.

Sharon Watts (Letitia Dean) overhears the conversation and asks what happened. Linda will tell her everything, and Sharon encourages her to come clean to Nancy. Meanwhile, Sharon can’t forgive Janine for what she’s done, and she promises to make her pay.

Kelly Bright, the actress who portrays Linda Carter, says that her character will eventually realize that Nancy and Zack have been conned. The amount they paid was the same as the amount Janine gave to her.

“She confronts her, but is not completely sure until Janine admits it and says, ‘Yeah, so what?’ You’d think Linda would tell Nancy and Zack the truth and get Janine in trouble, but Janine is so clever…” Bright hints.

Days Of Our Lives (DOOL) Spoilers: Lucas’ Secret Blow Up At Wedding As He’s Arrested For Kidnapping