EastEnders: Ben And Callum Make Up, Trouble Still On The Horizon 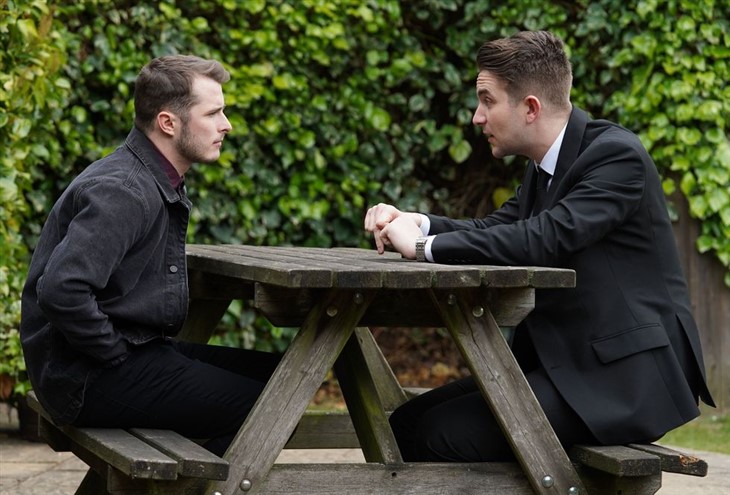 EastEnders spoilers and updates tease that Ben Mitchell (Max Bowden) and Callum (Tony Clay) will make up as their marriage goes through a rough patch. However, trouble is still on the horizon as the pair fail to address the root cause of their marital problems.

Fans may recall that Ben has decided to go back into the closet about his sexuality after the recent homophobic attack on him and his husband Callum by Neil Hughes (Thomas Coombes) and his right-wing extremism group.

Ben was deeply shaken by the attack. He was reminded of his former boyfriend Paul Coker (Jonny Labey) who died in a similar attack as he watched Callum getting beaten. He was unable to open up about his feelings. Ben turned to his grandmother and admitted that he’s scared.

His conversation with Pam had an effect on Ben’s decision to stop living publicly as a gay man. Callum protested but Ben insisted that it was the only way for them to have a future together.

Ben admits to Kathy Beale (Gillian Taylforth) that he’s been pushing Callum away so he could protect his husband. However, the latter comes up with a plan to denounce the hate group’s attack by having a huge party outside The Albert.

However, Ben didn’t attend the event, leaving Callum heartbroken. The latter was so disappointed that his husband didn’t join him at the LGBTQ+ celebration that he took off his wedding ring.

While the celebration was underway, some of their nearby neighbors complained about the noise. So Walford copper Jack Branning (Scott Maslen) went to the party to shut it down. However, Callum was defiant and was going to be arrested by Jack.

Fortunately, Ben showed up and told Jack that he’d have to arrest everyone at the party if he wants to take Callum away. Jack had no choice but to back down and leave the party.

Calum and Ben made up but they still failed to address some issues. To be more specific, Ben is still unable to admit to Callum that he’s anxious about being out publicly because of the recent attack. He still needs to come clean that seeing Callum get beaten up reminded him of his former boyfriend. Will Callum and Ben move past their recent troubles?