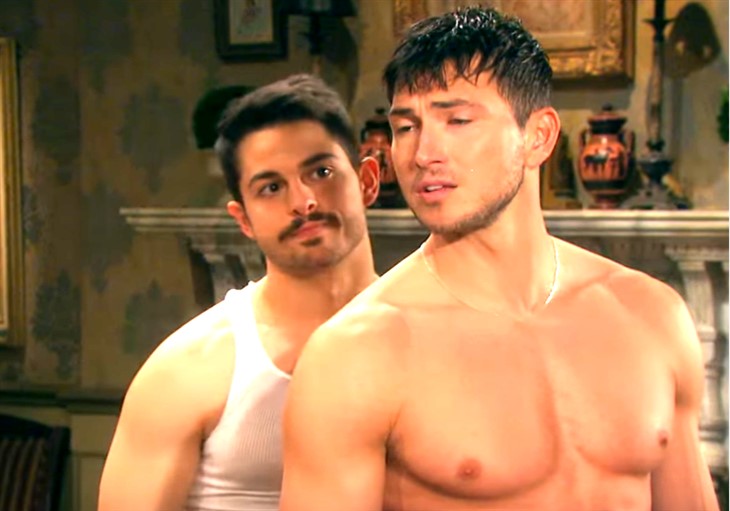 Days of Our Lives spoilers reveal that Sonny Kiriakis (Zach Tinker) arrives at the mansion to talk to Victor Kiriakis (John Aniston). Sonny doesn’t see Victor, though. Instead, Sonny is shocked to face Alex Kiriakis (Robert Scott Wilson). Very little is known about Alex but the cocky look on his face suggests big problems. Could Sonny and Alex get into a fiery sibling rivalry?

DOOL spoilers reveal that Ben Weston (Robert Scott Wilson) left Salem with Ciara Brady Weston (Victoria Konefal) and the baby. While Ben is gone for now, Wilson is confirmed to reappear as a different character. That character is Sonny’s half-brother, Alex.

During the week of July 25, it is teased that Sonny will have a joyful reunion. That reunion is with Alex. Despite Sonny telling Will Horton (Chandler Massey) to take the offer to help make a movie in Hollywood, it seems that the Kiriakis heir will get some good news.

Of course, fans know that every happy reunion in Salem usually has complications. So, don’t expect Sonny and Alex to get along forever.

Days of Our Lives spoilers reveal that fans watched a short video clip of Sonny facing Alex. Sonny was definitely shocked to see his brother at the Kiriakis mansion. While Sonny and Alex do share Kiriakis blood, it appears that is where the similarities end. The way Alex was smirking at Sonny implies this new character is nothing but trouble.

One of the storylines that could cause tension between Sonny and Alex includes a battle over the business. Victor will likely want Sonny and Alex to be co-CEOs of Titan Industries. While Sonny might be okay with that, Alex looks like the type of guy that will take control. Plus, Sonny is a good guy with morals.

For some reason, we don’t see Alex as the type of man to play by the rules. It is speculated that might not be the only cause of tension between the brothers, though. Sonny is nothing like Victor. If Alex seems like a miniature version of the Kiriakis patriarch, that could win him some favors. In fact, Sonny might find himself on the outside while Alex is given everything he wants.

What do you think is going to happen when Alex arrives in Salem? How long until Sonny and Alex get into a rivalry? Will Sonny be the good guy while Alex is a troubled bad boy? Share your thoughts and remember to keep watching the NBC soap to see what happens next.

What Are Sister Wives Fans Saying About Season 17?