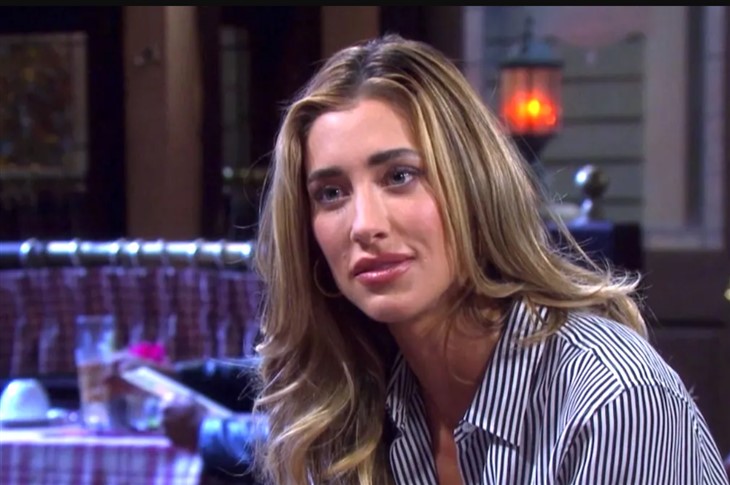 Days Of Our Lives Spoilers – Sloan Petersen Packs Quite A Wallop

In the recent Day of Days trailer also known as the DOOL winter preview, there’s a scene where Eric, Sloan, and Nicole Walker (Arianne Zucker) are standing outside Brady’s Pub. It looks like Sloan doesn’t have much on under her winter coat as she slaps Nicole nine ways past Sunday as Eric looks on, and Eric lives above the Pub. Eric and Nicole had a serious falling out and a fight they couldn’t come back from after Nicole interfered and influenced Jada Hunter (Elia Cantu) to abort Eric’s baby.

Later, an off-the-wagon Eric encountered a drunken EJ and Nicole together and he slugged EJ and knocked him off his feet. EJ probably asks for it with his drunken taunts, but Eric is arrested and that’s how he gets acquainted with Sloan, when he hires her for his lawyer.

DOOL Spoilers – Belligerent’s Not The Word

Eric goes down a very dark path, and belligerent’s not the word for what he does over the next few weeks. He’s off the wagon for one thing, and he’s sneaking a lot of Scotch, his father Roman Brady (Josh Taylor) apparently not having a clue. Roman, Kate Brady (Lauren Koslow) and Brady Black (Eric Martsolf) all know that Eric broke up with Jada to reunite with Nicole, and that Jada decided to abort. But apparently EJ is the only one who knows Eric dumped Nicole for talking Jada into aborting, and seeing them together only stokes the anger fire. Eric will stew in his juices in the jail at the Salem Police Department, Rafe Hernandez (Galen Gering) perhaps being the one to arrest him –awkward!

Eric has never been one to engage in recreational sex or engage in one night stands, he’s always been involved emotionally with his women. Jada and Eric moving so quickly was an anomaly for Eric, and Eric has definitely never been a player like Alex Kiriakis (Robert Scott Wilson). Perhaps after Sloan gets him out on bail or charges dropped and out of jail, she’s convince him to have a little fun and they’ll have too many drinks.

In the scene from the winter preview, Eric is dressed and Nicole is dressed, but anyone can imagine Nicole interfering again. Maybe Nicole earns a well-deserved slap after she drags Sloan out of bed with someone else to prove something to Eric, but that might be a case of pot meet kettle.