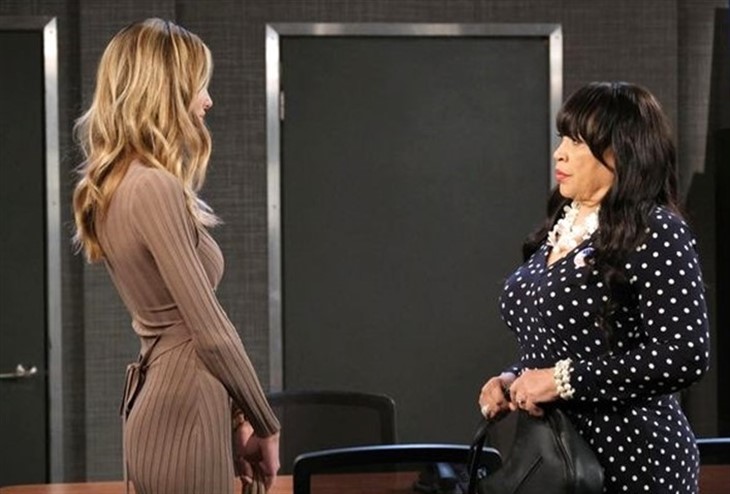 Days of Our Lives spoilers and updates tease that there will be a big confrontation when Sloan Petersen (Jessica Serfaty) makes something abundantly clear. Just because Chanel Dupree (Raven Bowens) made bail, it doesn’t mean she’ll be getting away with murder!

Days Of Our Lives Spoilers – Out For Blood

It’s plain to see that Sloan is out for blood, not just for revenge; she lost her mother because of Chanel, and now Chanel’s lost her mother because of Sloan. Paulina Price (Jackée Harry) was arrested and booked just as Chanel was bailed out, and now it looks like Paulina is treated as an accessory to Martha Bedford’s (uncast character) murder. Paulina paid the school where Nathan Bedford (uncast character) Chanel’s professor who seduced her off to prevent a scandal and Martha’s death had been deemed a suicide.

Since Chanel and Martha had struggled on the roof, and Chanel was overwhelmed with guilt, she blamed herself for the death. It could have just as easily been an accident but Chanel admitted she pushed Martha off the roof in self-defense.

Chanel and Allie Horton (Lindsay Arnold) still have to make a living while Chanel awaits her trial and the family scrambles to help Paulina. Abe Carver (James Reynolds) is also feeling the heat as he’s being pressured to step down as Mayor of Salem. But as Chanel walks past the Christmas tree in the Horton Town Square, she spots some very unwanted graffiti on her store windows; someone’s spray painted the word “murderer”.

Sweet Bits Bakery was Chanel’s dream, and now someone is even trying to turn her dream into a nightmare, as well as her and her family’s lives. She’s sure that Sloan will hype it up so neither she nor her mother will get a fair trial, it’s almost enough to tempt her to sue her for slander.

Days Of Our Lives Spoilers – They Must Fight Back

Sloan tracks Chanel down and confronts her when she’s by herself, and makes an ugly scene as she hisses she’ll pay for her mother’s murder and seducing her father. This is inside her bakery with customers coming in and soon Allie comes in from the kitchen and witnesses the scene and demands the scam lawyer leave the premises. She’ll call the police if necessary and make sure to complain to the legal board while she’s at it, her former stepfather is SPD Commissioner Rafe Hernandez (Galen Gering).

Sloan backs down and turns around to leave, but informs Allie and Chanel this is not over by any means. Allie says they will fight back and Sloan says Chanel’s not getting away with murder.