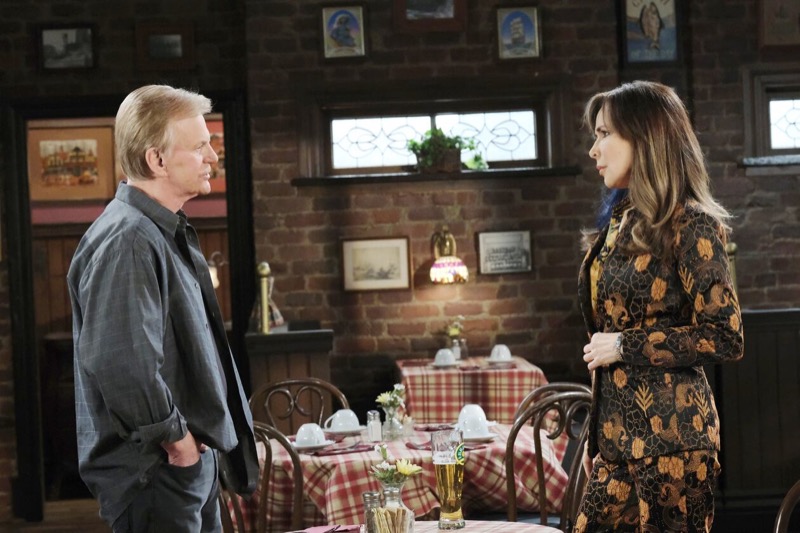 Days of Our Lives spoilers tease that Sami Brady (Allison Sweeney) and Lucas Horton (Bryan Datillo) isn’t the only couple that is over after Chad DiMera’s (Billy Flynn) revelation at their aborted wedding. Chad revealed that Lucas kidnapped Sami last year. But it also came out that Kate Roberts (Lauren Koslow) was aware of this fact all alone. Roman Brady (Josh Taylor) was furious to learn that Kate not only let his daughter travel the world with her kidnapper but that she kept everything from Roman as well.

Roman was so angry with Kate that he ordered her to not only leave but to move out of the Pub as well. Kate will certainly move on but Roman will have a much more difficult time. It took many years for Roman to get over Dr. Marlena Evans (Deidre Hall). He did have a brief romance with Anna DiMera (LeAnn Hunley), but other than that Kate is the only person to catch Roman’s eye. But there is one woman who still entertains romantic feelings for Roman, and it may be time for her to return to Salem!

Marlena’s lookalike, Hattie Adams (also Deidre Hall) has always been interested in Roman. At first, Roman rebuffed Hattie not only because of her resemblance to Marlena but the fact that she impersonated Marlena on many occasions while the real Marlena was a prisoner somewhere. But in recent years, Hattie has been a valuable stand-in when Marlena needed to be in two places at once. Seeing how much Hattie had changed, he offered her a waitress position at the Brady Bub. Hattie’s feelings for Roman only grew stronger, and Roman seemed interested as well. But Hattie left town after realizing Roman still didn’t see her in a romantic light.

Days of Our Lives Spoilers – Hattie Adams to the rescue!

Roman hasn’t really ever considered dating Hattie, most likely because of her resemblance to Marlena. It took Roman a very long time to get over the fact that Marlena fell in love with John Black (Drake Hogestyn). But perhaps after his relationship with Kate falls apart, Hattie will seem like a perfect option. She would be completely devoted to Roman and it might just be the refreshing change that Roman needs. Could Hattie finally get her man?

Are Roman and Kate over for good? Should Hattie return to Salem? Could Roman finally see Hattie as a romantic partner? Anything can happen in Salem so stay tuned to Days of Our Lives airing weekdays on NBC.

And don’t forget to check back right here regularly for all your Days of Our Lives news, information, and spoilers!

General Hospital Spoilers: Sonny and Spencer Battle It Out

DOOL Spoilers: Ava’s Crazy Is Back As She Stalks E.J