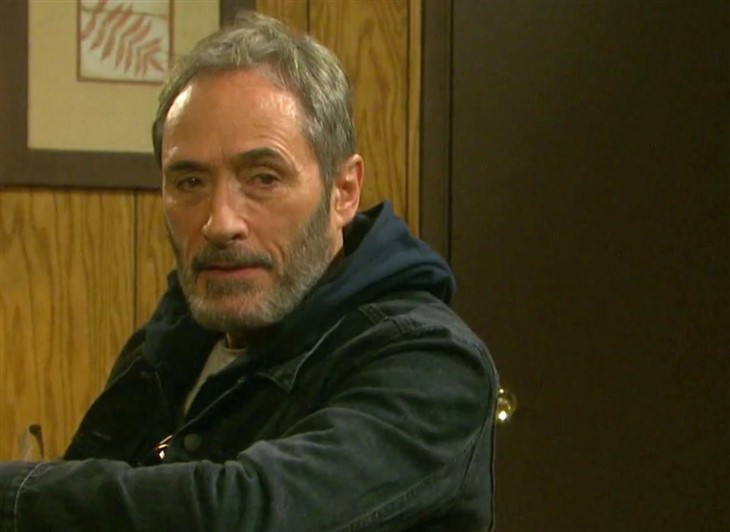 Days of Our Lives spoilers and updates tease that Orpheus, aka Milo Harp (George del Hoyo) will give his son, Evan Frears aka Christian Maddox (Brock Kelly) shocking news! In an upcoming DOOL episode, he’ll throw his son a zinger!

Evan is in prison for strangling Ben Weston’s (Robert Scott Wilson) sister, Jordan Ridgeway (Chrishell Stause); he was also complicit in Ciara Brady Weston’s (Victoria Konefal) kidnapping.  Evan has had it in for the Westons ever since Jordan ran off with their son David Ridgeway (Caleb and Kyler Ends). Finally his sister Zoe Burge (Kelly Thiebaud) got custody of the tot and moved out of Salem, breaking Rafe Hernandez’ (Galen Gering) heart who had gotten very attached to him.

His father, Orpheus, even though both father and son are now in Statesville Prison, has contacts on the outside who keep in touch with him. One is Clyde Weston (James Read) who has settled in Salem permanently and has a new grandson through Ben and Ciara.

The Westons receive a life-changing gift from Hope Brady (Kristian Alfonso) that will enable them to leave Salem and make a new start! This kind of leaves Clyde by his lonesome in Salem, but he’s got a new girlfriend in Nancy Wesley (Patrika Darbo) so he won’t be totally alone. Ben, Ciara and baby Bo Weston (Cody and Warren Krasnow) will soon be leaving Salem for an undetermined time – possibly forever if they are happier where they’re going! It looks like they will spend time with Hope and Bo Brady (Peter Reckell) so there may be some time travel involved there! Bo came as Angel Bo the last time when he raised Tripp Johnson (Lucas Adams) from the dead and visited Ben, Ciara and Baby Bo after helping Ciara save him!

Orpheus hears the shocking news from Clyde, that Ben, Ciara and baby Bo are leaving town for the foreseeable future, but who can blame them after enduring so much trauma there? In the past few years, both Ben and Ciara had been kidnapped and presumed dead, Ben had nearly been executed for Evan’s crime and Satan almost got their baby! That is more trauma than most people endure in a lifetime, and they want a better life for their child!

Orpheus is surprised but not really shocked, what is shocking is to hear that Bo might really be alive somewhere after all, no thanks to Dr. Wilhelm Rolf (William Utay)! Orpheus is now the head honcho among the prisoner hierarchy, so he makes his way to tell his son the latest news from Salem!

Orpheus really isn’t all that shocked at the news that the Westons are leaving town possibly permanently but Evan is! Evan had some hopes and dreams and plots and plans of his own for Ben and his family, because he wasn’t done with his revenge! Orpheus doesn’t know where they are going and Clyde doesn’t either, just that they’re going and they’ll keep in touch! Evan knew there was a baby on the way because satan told him when he was out for a short time helping AllieDevil Horton (Lindsay Arnold) “kill Ben”! Evan wanted to do the old eye for an eye thing and kidnap Baby Bo; now it will be impossible!