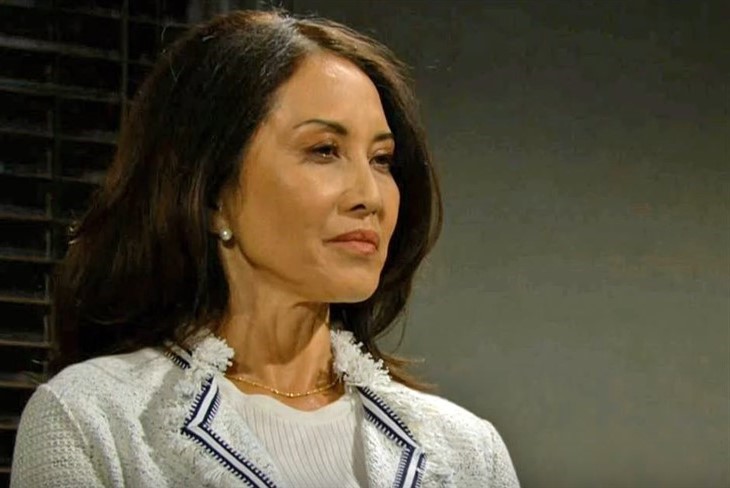 The Bold and the Beautiful spoilers reveal that Naomi Matsuda was seen on set after Li Finnegan’s death. This suggests that Li survived the car crash that submerged her car underwater. Li could have been saved, so why hasn’t she gone to the police? It sounds like an amnesia storyline and with nobody realizing she’s missing, Li would be listed as “Jane Doe.”

The Bold And The Beautiful Spoilers – Sheila Carter’s Road Rage

B&B spoilers reveal that Sheila Carter (Kimberlin Brown) wasn’t going to let Li get away or contact the police. Sheila initially just wanted to say goodbye to John “Finn” Finnegan (Tanner Novlan) at his final resting place. However, once Sheila discovered Li secretly smuggled Finn out of the hospital and has been keeping him alive, she was both relieved and furious.

Sheila was hopeful that she could have another chance with Finn and Hayes Forrester Finnegan (Piper Harriot) when Li said they were both mothers to the comatose doctor. However, it was just a ruse so Li could get help.

Once Li ran for her life, Sheila chased her down until the car crashed. As Sheila watched the car sink into the water with Li trapped inside, the sociopath smiled.

It is teased that Jack Finnegan (Ted King) will contact Taylor Hayes (Krista Allen) and Thomas Forrester (Matthew Atkinson). Jack hasn’t had any contact with Li or Finn since his deception about Sheila was exposed. So, not only does Jack want to find out why he can’t reach Li, he has no idea that Finn supposedly died.

When Taylor and Thomas learn this information, they will be even more worried about Li. Remember, Ridge Forrester (Thorsten Kaye) tried to call Li to warn her about Sheila escaping. The last time that they tried to call Li, Sheila ordered her not to pick up. Taylor suggested that they continue trying to reach Li just to make sure she was okay.

However, Ridge got sidetracked and it wasn’t brought up again. With Sheila on the loose, one would think a welfare check would be in order. However, Ridge’s love triangle was obviously more important than a woman’s life.

The Bold And The Beautiful Spoilers – No Death Reports

The Bold and the Beautiful spoilers reveal that the Finnegan and Forrester families haven’t been notified of any deaths or accidents. The vehicle’s license plate or VIN would lead to Li’s home address. It’s clear that Li wasn’t taking care of Finn at her own house but somewhere nobody would look. After all, Sheila mentioned how hard Li was to track down.

Since nobody realizes that Li is missing, the police aren’t looking for her. So, Lis is probably in a hospital somewhere and nobody has a clue who she is or that is even a missing person.

It sounds like the reason why Li hasn’t called the police, gone back to strangle Sheila, or checked up on Finn is that she can’t. Li might have survived by she could have amnesia. So, will Jack end up finding Li? Will she ever be able to tell anyone what Sheila did to her or could the fugitive get away with another attempted murder?