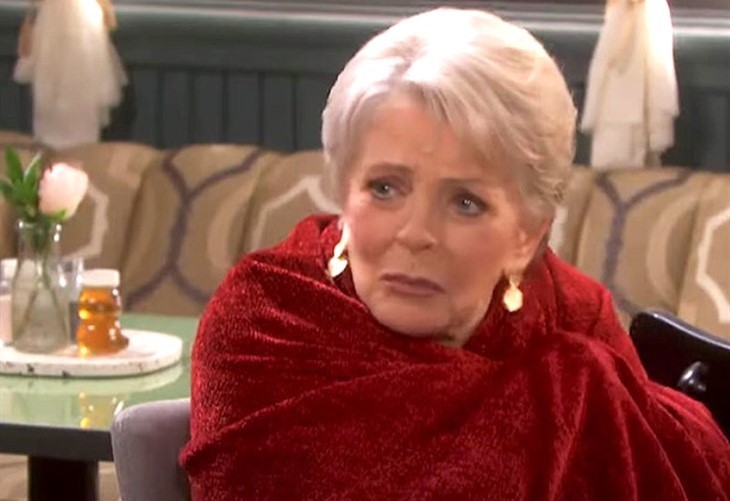 Days of Our Lives spoilers reveal that Julie Williams (Susan Seaforth Hayes) believed the devil was defeated. However, Julie will soon learn that Marlena Evans’ (Deidre Hall) exorcism was only partially successful. Marlena was saved, but the devil didn’t go back to hell. Instead, Lucifer jumped into Johnny DiMera (Carson Boatman). Could Julie be the next one in danger?

DOOL spoilers reveal that when the devil came back to Salem, Marlena was not the first target. It was Doug Williams (Bill Hayes), who everyone thought was suffering from dementia or Alzheimer’s disease. Then, the devil jumped from Doug to Marlena. When that happened, the devil made sure that Doug couldn’t tell anyone what was really going on.

The devil only temporarily won, though. Julie refused to give up and was determined to get her husband back. In the end, Julie succeeded but it turns out it was just a bittersweet victory.

It was quite a while before everyone realized the truth about “MarDevil.” Eric Brady (Greg Vaughan) showed up in Salem just in time to help John Black (Drake Hogestyn) with the exorcism. Everyone believes that the exorcism was successful, and in a way, it was.

However, the devil didn’t get sent back to hell. Instead, the evil entity just jumped from one body to another. Currently, it is Marlena’s grandson, Johnny, who is possessed by the devil.

Days Of Our Lives Spoilers -‘JoDevil’ DiMera Boasts and Threatens

Days of Our Lives spoilers reveal that during the week of January 31, “JoDevil” will pay a visit to Julie. Under normal circumstances, Julie would be happy to see Johnny. With everything that’s happened, Julie would give Johnny a stern talking to or try to figure out what’s going on.

However, it is teased that Julie is “unnerved” by the visit. So, it sounds as if “JoDevil” brags about taking over Johnny’s body. The evil entity might even threaten Julie. After all, Julie was a thorn in the devil’s side when Marlena was possessed.

Julie is not the type of woman that backs down easily. Julie bravely faced the devil before and made it clear she had God on her side. This time probably won’t be any different. Of course, Julie could decide to tackle this in a different way.

Julie might pretend that everything is just fine and dandy during the visit. After “JoDevil” leaves, Julie could alert John and Marlena to what’s going on. However, can Johnny be saved before it’s too late? We will have to keep watching the NBC soap to see what happens next.