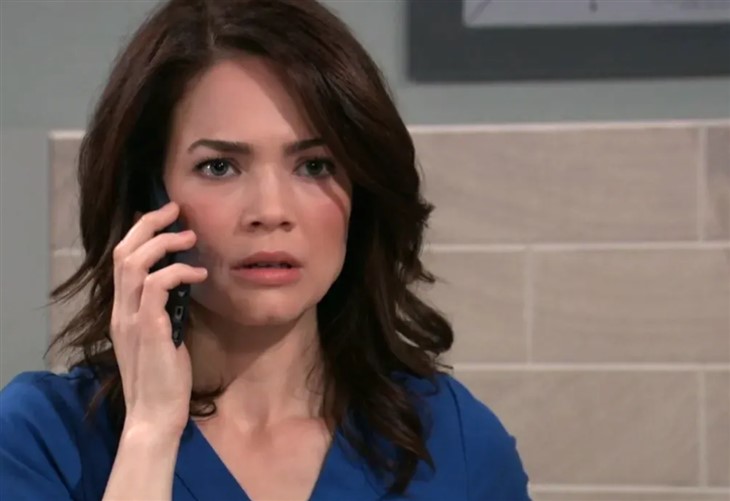 General Hospital spoilers reveal Elizabeth’s story FINALLY getting started, although we thought her current storyline started back at Christmas when she started finding her wedding ring in strange places.

After stops and starts with a story that the GH writers clearly didn’t know what to do with, they now claim we are finally getting to the meaty parts of the storyline that’s been going on all year. It started with Elizabeth Webber (Rebecca Herbst) finding her wedding ring in a drawer and then finding a slashed dress.

She was thought to have a stalker and then she thought Franco Baldwin’s (Roger Howarth) ghost was visiting her, but it turned out that Liz had some weird syndrome that resulted from sleeping pills and she was going into fugue states and doing these things to herself.

Through it all, Hamilton Finn (Michael Easton) has been alarmingly disrespectful of Liz’s wishes and it’s been borderline obsessive as he decided he was in love with her. After looking like she was going to puke when he said it, Liz said she loved him too but then had a memory of Peter August in the stairwell with a little girl calling out “Daddy”.

GH Spoilers – Is GH Finally Getting A Move On For Liz Webber?

Now, head writers Chris Van Etten and Dan O’Connor swear this is it. We are finally going to get the meat of this storyline and learn why Elizabeth has been acting this way.

“Liz’s returning to work [after being in Shadybrook] does not mean it’s the end of her story,” O’Connor said in the August 23, 2022, issue of Soap Opera Digest. “In fact, the story of Elizabeth and her past is only just beginning.”

Really? You could have fooled us as this story seemed to begin at the end of 2021 and now we are in the second half of 2022. But O’Connor says really.

“The fill backstory of Elizabeth and her family that has been unexplored all this time has always been a story that we have wanted to tell and we have always been planning to tell and we are finally in a position where we could unpack all this and make this a Liz-centric story.”

Stay tuned to General Hospital weekdays to see if this is really true.

General Hospital Spoilers: Is Jordan Helping Portia Or Setting Her Up?