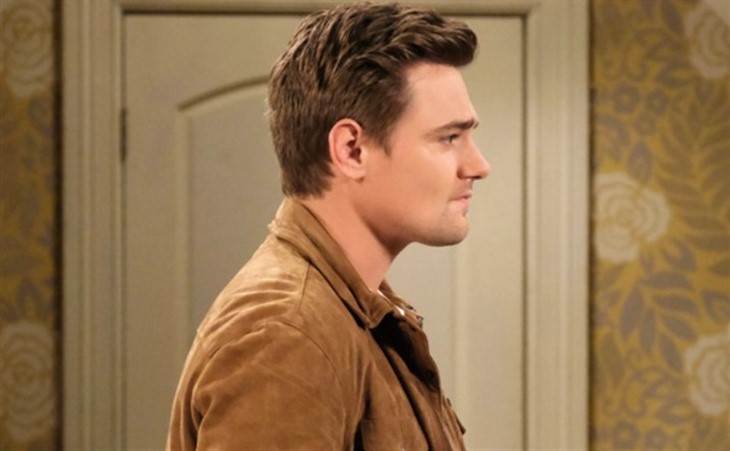 Days of Our Lives (DOOL) spoilers and updates tease a guilt-tripped Johnny DiMera (Carson Boatman) will be forced to keep EJ DiMera’s (Dan Feurreriegel) secret. This secret is the secret that Johnny and Wendy Shin (Victoria Grace) found out about the brainwashing of Stefan DiMera (Brandon Barash) in Jakarta.

Both Wendy and Johnny confronted Li Shin (Remington Hoffman) and EJ, respectively, the same day; they had turned the tables while in Jakarta. They each advised them that the memory erasure shot that Li actually told Dr. Wilhelm Rolf (Richard Wharton) to give them didn’t work. EJ actually didn’t have anything to do with that nor the orders to brainwash Stefan, but Johnny assumed that either he did, or he knew.

That was actually all Kristen DiMera’s (Stacy Haiduk) doing but EJ certainly is aware of it now, after Johnny confronted him about it wrongly.  It doesn’t mean EJ won’t reap the benefits of that knowledge, however-he’s already blackmailing Li over something so Li can keep his job and Gabi Hernandez (Camila Banus) as well.

Johnny came home to find EJ an emotional wreck, after getting drunk to the point of possibly hallucinating a dead Ava Vitali (Tamara Braun) the night before. But chances are, Ava is very real and alive because a bullet casing was left at the spot where Chad and Tony DiMera (Billy Flynn, Thaao Penghlis) retrieved EJ. Rafe Hernandez (Galen Gering) had been there earlier, at the site of the wreck but the struggle with Ava occurred after he left and before his brothers arrived.

According to Days of Our Lives spoilers, Johnny was informed of the wreck and the deaths of Ava and Susan Banks (Stacy Haiduk) at the same time, bringing tears to his eyes. Johnny slung a few accusations but he could see EJ was shocked about Stefan’s brainwashing but he took it as shock at being found out.

Both Johnny and EJ are devastated over Susan’s death, and Johnny over Ava’s as well, he couldn’t fully process Ava’s part in Susan’s death. Later, for sure, he’ll express vitriol and accuse his father of driving Ava to insanity, but for now that’s a long ways off. It will be easy for EJ to get Johnny to hold off on any secret spilling for now, there’s grieving and funeral arrangements ahead.

Johnny will naturally feel guilty about spilling EJ’s secrets even if EJ is manipulating him into doing so, taking advantage of the sad Susan situation. Eventually though, Johnny will certainly strike back!