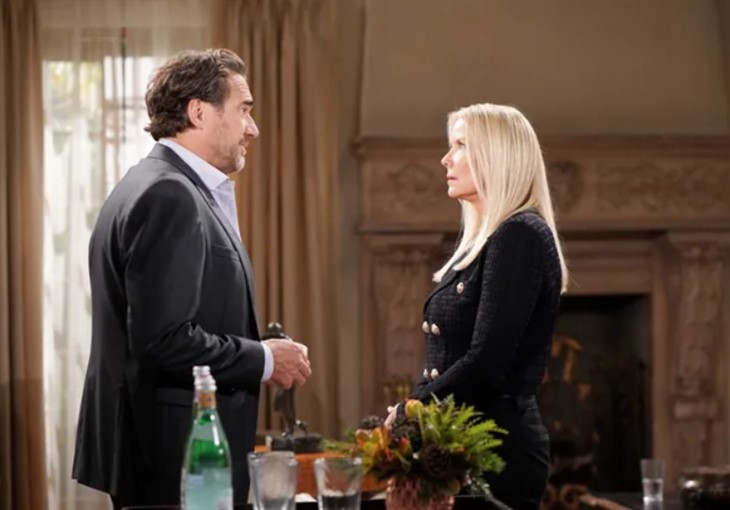 The Bold and The Beautiful spoilers and updates tease that Brooke Logan (Katherine Kelly Lang) has a major decision ahead of her. Could it be that in an unexpected twist, she won’t forgive Ridge Forrester (Thorsten Kaye) and take him back when he comes to make amends?

The Bold And The Beautiful Spoilers  – Ridge Forrester Wouldn’t Budge

When Ridge went running back to Taylor Hayes (Krista Allen) in Aspen, he wouldn’t budge with his narrative that Brooke had lied about something. She had no idea what it was or why he would think that, but he had heard a call to Child Protective Services in her voice. The call said Thomas Forrester (Matthew Atkinson) was unstable, and he had a knife; Ridge knew she had threatened to call CPS over the pocketknife he was cutting an apple with.

So her going through with the call, after making so much trouble over her obsession with Thomas’s instability and obsessive behavior made sense. Ridge may have forgiven her overreaction over the apple and the knife and even the call if only she’d have admitted it but she wouldn’t.

B & B Spoilers – Ridge Forrester Rushes To Make Amends

According to The Bold and the Beautiful spoilers, Ridge finds out that Thomas faked Brooke’s voice with a voice changer app on Douglas Forrester’s (Henry Joseph Samiri) phone as he is at the wedding altar with Taylor. Steffy Forrester Finnegan (Jacqueline Macinnes Wood) stops the wedding and Ridge finds out that way, along with finding out Taylor found out from Steffy right before they assembled.

He’s upset with Taylor for not telling him what she knew, he’s upset with Thomas and reams him out, and likely rushes out of his wedding to make amends with Brooke. He may even grab Douglas’ phone on the way out so he can play the recordings for Brooke-thinking she’ll forgive him, but by this time she might not! After all, now, there has been a serious breach of trust on both sides of the now former couple and there may be no going back.

The Bold And The Beautiful Spoilers – Not Going Through This Again

No one would blame Brooke, or Taylor for that matter, for not wanting to go through this waffling of Ridge’s any more. Taylor was done with it when she went to Aspen, but he convinced her he wouldn’t leave her for Brooke anymore. But that was before he knew that Thomas had faked the CPS call; and even though Brooke gets some answers now she’s mad too as much as Taylor is.

Ridge may need to be taught a lesson to not take any woman or her love for him for granted. Brooke and Taylor may agree on that one thing, and it may take losing both of them forever for him to learn it.