Days Of Our Lives Spoilers: Gabi Deceives Jake, Thanks To Johnny DiDevil’s Impersonation! 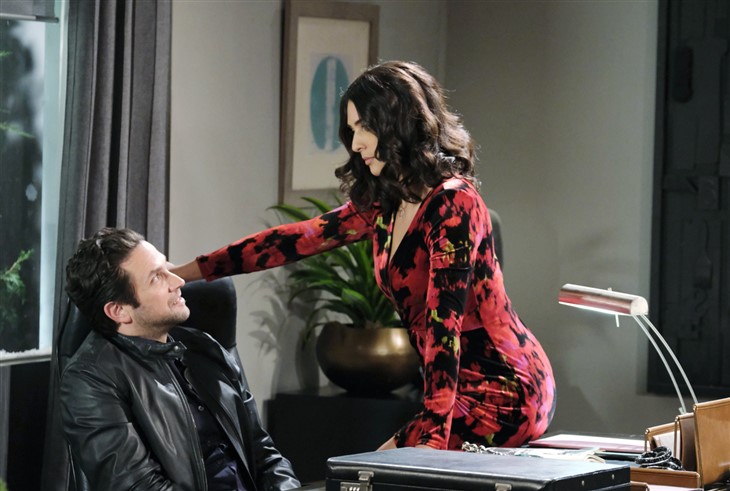 Days of Our Lives spoilers and updates tease that since Gabi Hernandez (Camila Banus) was deceived by Johnny DiDevil’s (Carson Boatman) impersonation of Jake DiMera (Brandon Barash) she’ll deceive Jake in an upcoming episode of Days of Our Lives!

Days of Our Lives viewers will recall that Gabi felt deceived and betrayed as she listened to “Jake” offering to Maggie Kiriakis (Suzanne Rogers) to run Titan, but left Gabi out of the business equation! Days of Our Lives viewers will recall “Jake” wanting the whole pie for himself and Gabi was not amused; Gabi had overheard “Jake” asking Maggie for a written guarantee that he’ll be made CEO of DiMera. Maggie figured he’d want one, but also said making Gabi CEO of Titan is off the table. “Jake” assured her that would be no problem-leaving Gabi feeling deceived and betrayed. Viewers will recall that the real Jake and Gabi were trying to run both DiMera and Titan, with Gabi being a full CEO as well, while Jake ran DiMera.

Days of Our Lives viewers will remember that Johnny DiDevil got the hots for Gabi and was trying to get her into his bed, while she was using him to get an advantage at DiMera! Jake had warned her that he thought she was playing with fire, but neither had dreamed exactly how much or which type of “fire” that entailed! Divide and conquer is always a good plan when trying to defeat an enemy, and Johnny has managed to divide and conquer Jake and Gabi as a couple! By impersonating Jake, even though he didn’t know Gabi was out there listening, he’s successfully driven a wedge between the couple. Now, after being deceived by Johnny DiDevil’s impersonation of Jake, Gabi wants some revenge of her own and deceives Jake!

Days Of Our Lives Spoilers – Gabi Hernandez Gets Revenge

Days of Our Lives viewers know that Gabi can be a bit vengeful when she’s been betrayed – remember when she controlled Julie Williams’ (Susan Seaforth Hayes) pacemaker after leaving her lie on the ground assuming she was faking a heart attack? Now she needs to get revenge on who she thinks is Jake, especially after he acted all innocent about his plotting against her to Maggie about not advocating for her to be CEO of Titan!

Gabi doesn’t have any plans to have a controllable pacemaker implanted in Jake but she does have some plans for revenge – employing a fine tuned method of deceit! One way to do that might be to let Jake think that she gave into Johnny’s lust for her and Days of Our Lives viewers will see her let Jake “catch” her in talking about a romp with Johnny-Johnny’s a lot younger than Jake so that should hurt his ego!

Days of Our Lives viewers will see the vindictive Gabi “arrange” for Jake to overhear her bragging on the phone about how hot Johnny is in bed! Of course, there won’t be anyone on the other end of the line, but Gabi just wants to hit Jake where it hurts, not realizing it wasn’t him who worked against her with Maggie! Days of Our Lives viewers will see Jake be not only hurt but offended – and he’ll want answers. Gabi won’t trust him to give him the answers he seeks and the devil will have put a wedge between yet another couple; if only they both knew that Johnny had impersonated Jake to Maggie!

B&B Spoilers: Taylor And Steffy Vs. Brooke And Hope