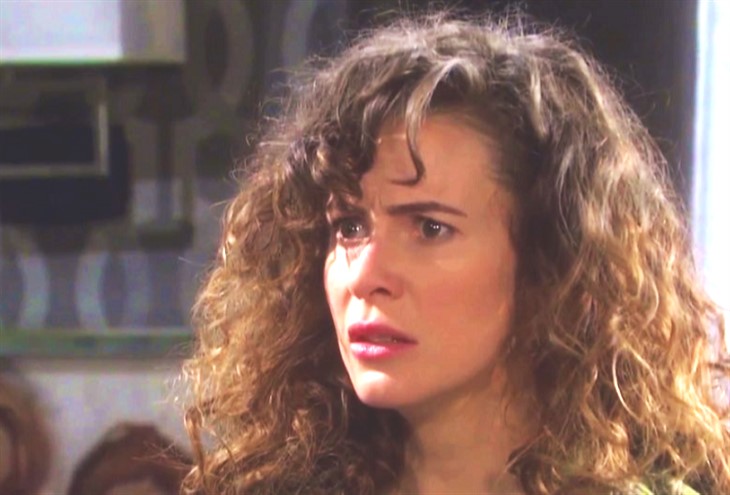 Days Of Our Lives Spoilers – Sarah Horton Asked For Her Baby

When Sarah got her memory back, she didn’t get it all the way back, only remembering to when she was raising Rachel Black (Finley Rose Slater) as her own. When the truth came out about her baby dying and having been switched with Kristen DiMera’s, (Stacy Haiduk) she went off the deep end! She took “Mickey” and ran off to Paris with her, staying in Chad and Abby DiMera’s (Billy Flynn, Marci Miller) old apartment there.

Eventually, Rex Brady (Kyle Lowder) found her there by chance and between him and Kristen, who had tracked her there, they convinced her to give Rachel back. Xander also went, and brought the grieving Sarah back home to Salem.

Xander then tries to rope Eric Brady (Greg Vaughn) into a lie – Xander was blindsided when Sarah asked for Mickey, and told her Eric had her on vacation. However, that backfires on him when Sarah goes looking for Eric at Nicole Walker’s (Arianne Zucker) at Eric’s apartment and is surprised to see Rafe Hernandez (Galen Gering) there.

Eric winds up finding Sarah and telling her the truth of what happened and Xander finds her collapsed in tears in Eric’s arms. But then Sarah may have a similar experience of going off the rails, and wind up at Salem University Hospital looking for her baby! In the meantime, Jan will have gone into labor and given birth to a preemie – and Sarah could kidnap baby Spears/Brady from the nursery!

It would make sense for Sarah to look in the preemie nursery as both Mickey and Rachel were born a little early; Sarah could regress to when the babies were born. Sarah gave birth to Mickey with Xander delivering her by the side of the road when she and Adrienne Kiriakis (Judi Evans) got into a wreck with Adrienne dying. Mickey had internal injuries that were not realized because of the rush to get her into the incubator, and Xander and Victor Kiriakis (John Aniston) switched her with Rachel.

So the combination of Jan’s baby being a preemie and Sarah’s going cray cray over her dead baby could create a situation where Sarah steals a baby or believes she’s hers! As for Jan, she will be furious when she realizes the baby that is supposed to tie her and Shawn Brady (Brandon Beemer) together forever is missing!

On the other hand, Sarah, even though she is in devastating grief all over again may go to the preemie nursery to make peace with Mickey’s death. There, she’ll find out that psycho Jan has given birth to a baby and won’t be in the loop to know Shawn is the father. She may think kidnapping the baby for herself is a noble act and she’s saving her from being raised by a psycho! She won’t know Jan is on house arrest for a crime either so she will think she can make up a story she found her on the doorstep. Then she’ll go through the steps to adopt an abandoned orphan baby!