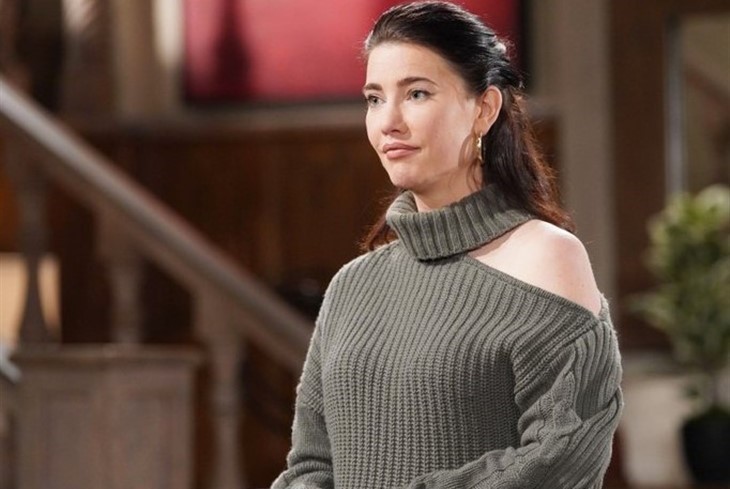 The Bold and the Beautiful (B&B) spoilers reveal that Sheila Carter (Kimberlin Brown) might be down but she’s not out yet. Sheila will find a way to make the Forrester family pay. Sheila seems to want Steffy Forrester Finnegan (Jacqueline MacInnes Wood) to know what it feels like to be forcibly separated from her son. Sheila just might find a way to make that happen.

The Bold And The Beautiful Spoilers – Sheila Carter’s Self-Victimization

Then, Sheila played the victim card. Sheila was furious when she realized the police were already at the house and Steffy had been wearing a wire.

Sheila promised that she was not going to prison. Sheila also said that this wouldn’t be the last they’ve seen of her. Steffy, Taylor Hayes (Krista Allen), and Ridge Forrester (Thorsten Kaye) think Sheila’s reign of terror is over.

However, Sheila’s story isn’t quite over yet. As Brooke Logan Forrester (Katherine Kelly Lang) mentioned to Ridge, Sheila never stays gone for good. Brooke’s statement could have been foreshadowing what is coming up next.

The Bold And The Beautiful Spoilers – Villain Down But Not Out

The Bold and the Beautiful spoilers reveal that fans predict Sheila will escape prison or get sentenced to a mental institution. Another theory is that Finn might still be alive, which could have Sheila avoid life in prison. Perhaps there is another twist, though. It’s possible that Sheila has an accomplice on the outside that could take drastic action.

Sheila will want Steffy to pay the price. Sheila kept mentioning that Steffy didn’t know what it was like to be forcibly separated from her own son. Could Sheila decide to make sure that Steffy knows exactly how that feels? Is it possible that Wood’s maternity leave exit is Steffy going missing?

Some viewers are convinced that Steffy will be kidnapped and held hostage. Sheila might not do the dirty work herself, though. Even if Sheila manages to avoid prison, everyone will be watching her.

Could Sheila have developed a closer relationship with the hotel assistant manager than people realize? Is it possible that Keith (Nick Waters) will help Sheila take Steffy away from everyone who loves her, including Hayes? If the kidnapping happens when Sheila is still behind bars, it could set up a new mystery. Share your thoughts and remember to keep watching the CBS soap to see what happens next.

Days Of Our Lives Spoilers: Belle A Baby Killer? Jan Miscarries After Altercation