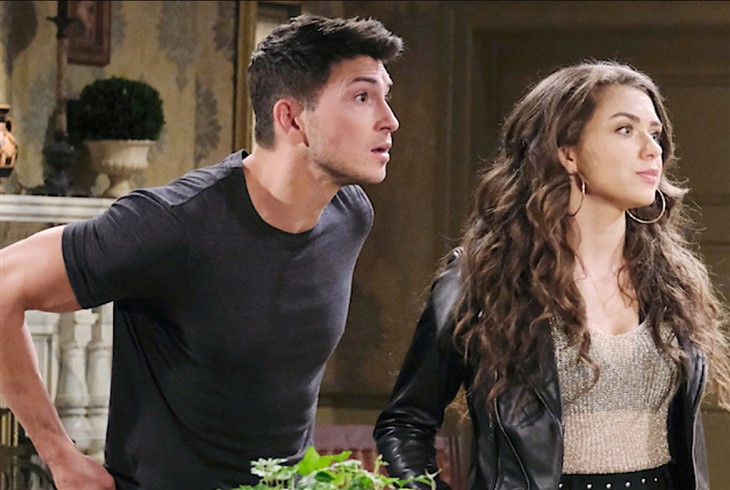 Days of Our Lives spoilers reveal that Ben Weston (Robert Scott Wilson) and Ciara Brady Weston (Victoria Konefal) are back on high alert. Julie Williams (Susan Seaforth Hayes) knows the devil is still walking among them. Fearing for their baby’s safety, Ben and Ciara turn to Susan Banks (Stacy Haiduk). Could Susan’s visions override the devil wiping her memory?

DOOL spoilers reveal that Julie had a conversation with Ben and Ciara about the cross. The couple told Julie that they loved the cross but there was a problem with it. When Ben and Ciara explained that the cross kept turning upside down, they suggested a logical explanation.

However, Julie insisted that it means the devil is still in Salem. This means Ben and Ciara’s baby is still in danger. This leads “CIN” to do everything necessary to protect their unborn child.

Ben and Ciara have different opinions on who the devil is possessing now. They know it’s not Marlena Evans (Deidre Hall) as she is behaving normally. As they go down the suspect list, Johnny DiMera’s (Carson Boatman) name comes up. Julie recalls what happened when Johnny came to the house and the odd events that happened.

Days Of Our Lives Spoilers – Turning To Susan Banks

Days of Our Lives spoilers for the week of March 7 reveal that Ben and Ciara will take drastic action. Not knowing who else to turn to, “CIN” reaches out to Susan. Fans might remember that Susan was the one who warned them that someone evil was after Ben and Ciara’s baby. Susan also did her best to defeat “MarDevil.”

When the devil took over Johnny’s body, Susan became a problem. “JoDevil” dealt with it by wiping Susan’s memory of anything that would expose him. Then, the devil compelled Susan to think everything was just dandy and leave Salem.

Even though Susan won’t be able to remember anything, Ben and Ciara will make a desperate plea. It’s not their lives they are worried about, but the life and soul of their unborn child. Since Susan is psychic, she doesn’t have to rely on her memory. Susan will be able to use her sixth sense to try and help “CIN.”

However, Susan’s psychic power can also be confusing and doesn’t give direct answers. Will Susan be able to point Ben and Ciara in the right direction? Will she return to Salem to confront the devil once again? We will have to keep watching the NBC soap to see what happens next with the possession storyline.