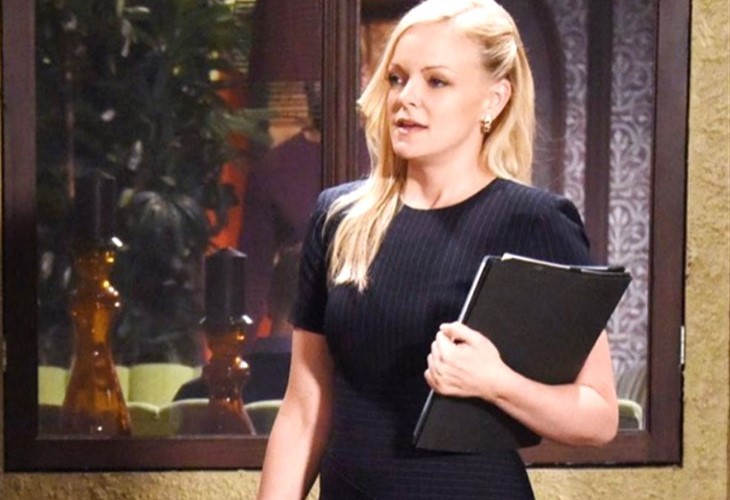 Days of Our Lives spoilers reveal Lucas Horton’s (Bryan Datillo) scheme worked. EJ DiMera (Dan Feuerriegel) is in prison for a crime he didn’t commit. Belle Brady (Martha Madison) confronts Chad DIMera (Billy Flynn) and could talk to Sami DiMera (Alison Sweeney) next. Will Sami confront Lucas and convince him to confess so an innocent man can be freed?

DOOL spoilers reveal that Chad and Kate Roberts (Lauren Koslow) just can’t stop discussing EJ’s situation. One of their discussions was bound to be overheard by someone and that finally happened during the week of February 28.

Tony DiMera (Thaao Penghlis) was shocked but was also deeply disappointed that Chad would stoop to that level. When Chad tried to justify lying on the stand during EJ’s trial, Tony reminded him that EJ is their brother.

During the week of March 7, Chad and Tony will be back from their island rescue mission. Tony likely will have put Chad’s deception out of his mind due to Sarah Horton (Linsey Godfrey). Tony and Anna DiMera (Leann Hunley) become very concerned that Sarah believes she is Renee DuMonde.

That same week, Belle will still be trying to help prove that EJ is innocent of kidnapping Sami. Belle begins to put the puzzle pieces together and questions Chad. Belle will ask Chad if he lied on the witness stand.

Days of Our Lives spoilers reveal that Belle might suspect Chad lied but probably won’t be able to prove it yet. However, with the information she has, Belle could try to reach out to Sami. Under normal circumstances, Sami would probably blow off Belle’s theory. However, Sami could begin to have suspicions of her own.

Sami will want to get to the truth no matter what it is. So, Sami could confront Lucas and ask him if he framed EJ. By this time, Sami and Lucas will already be in love again. Lucas will also be away from the devil’s deceitful mind games. So, he might just confess to the truth.

If Sami found out any earlier, she would have kicked him to the curb. However, Sami might understand Lucas’ desperation and could also get that the devil was involved in his scheme. At the same time, Sami can’t let EJ sit in prison for a crime he didn’t commit.

Sami just might be able to convince Lucas to return to Salem and confess, which might get EJ released from prison. However, will Lucas’ confession come in time or will Clyde Weston (James Read) and Orpheus (George DelHoyo) have already killed EJ by then?