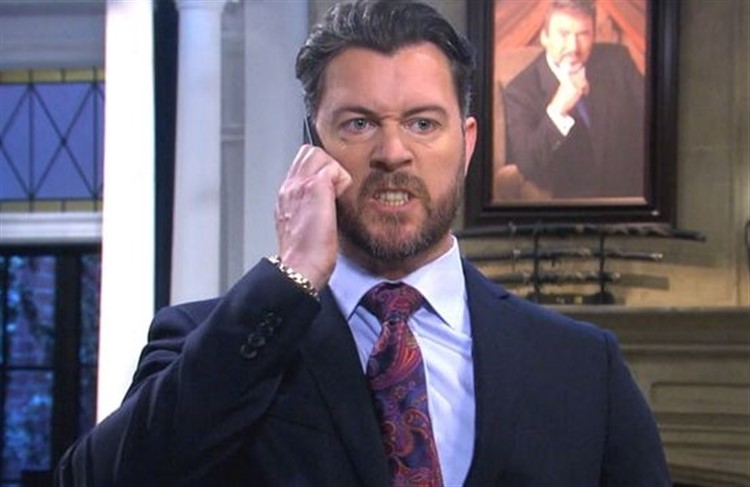 Days of Our Lives spoilers reveal quite a Thanksgiving week in Salem that nobody ever expected.

Days Of Our Lives Spoilers – First, A Deadly Crash

EJ DiMera (Daniel Feuerriegel) and Ava Vitali’s (Tamara Braun) pissing contest in which they kidnapped one another’s relatives comes to an end that nobody ever expected as Ava drives off a cliff, her car explodes, and EJ doesn’t know if his mother, Susan Banks (Stacy Haiduk), was in the car or not.

EJ is absolutely devastated and blames himself for everything that happened, but Ava’s mind conjuring up her sociopathic dead son Charlie Dale (Mike Manning) didn’t help either. Now, Thanksgiving will not be what the DiMeras had planned at all.

DOOL Spoilers – A Miserable Thanksgiving All Around

Thanksgiving isn’t what Rafe Hernandez (Galen Gering), Gabi Hernandez (Camilla Banus), and Li Shin (Remington Hoffman) planned either. Gabi and Li expected a nice meal at Rafe’s place, but they don’t even get dessert. It seems there was a dessert prepared special in the kitchen by Nicole Walker (Arianne Zucker), but as soon as she left, Rafe tossed it in the trash because he is tired of women always treating him like trash.

Things don’t seem to be going any better for Nicole after she leaves Rafe’s house. She confronts Jada Hunter (Elia Cantu) about the baby she is carrying and seems to be trying to convince her not to have the child. She points out that having a baby would be bad for her career and asks her why she would ever want a baby with a man who is in love with someone else.

According to Days of Our Lives spoilers, Jada proceeds to kick Nicole out of her apartment and later tells all to Kate Roberts (Lauren Koslow). Kate, who is no fan of Nicole, does her best to convince Jada to fight for Eric Brady (Greg Vaughan) and she just may do it.

Fans know how much Eric has always wanted a child and his heartache in learning that his baby with Sarah Horton (Linsey Godfrey) died soon after birth is something he will never get over. This can be his last chance, considering that Nicole can’t carry a child to term. We see Eric on one knee explaining all of this to Jada, but does this mean he is getting ready to propose? Stream new episodes of Days of Our Lives weekdays on Peacock starting at 6 AM EST to find out.