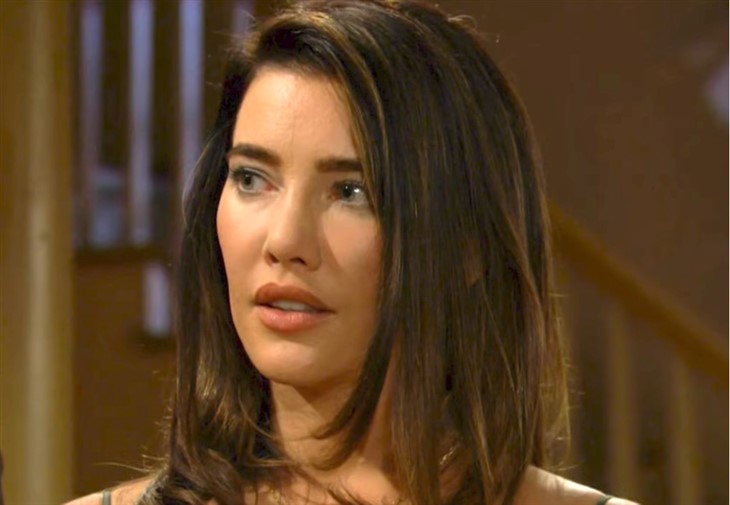 The Bold the Beautiful spoilers reveal Ridge Forrester (Thorsten Kaye) telling his family about Brooke Logan (Katherine Kelly Lang) calling CPS on Thomas Forrester (Matthew Atkinson). Dr. Taylor Hayes (Krista Allen) and Steffy Forrester-Finnegan (Jacqueline MacInnes Wood) are shocked and disgusted while Eric Forrester (John McCook) doesn’t believe for a second that Brooke would stoop this low to get back at Thomas. What happens when Steffy finds out the truth?

The Bold And The Beautiful Spoilers – ‘Tridge’ Wedding

Steffy wants her parents back together but not like this. I think she will begin to realize that her father does truly love Brooke Logan (Katherine Kelly Lang) and even though it will ultimately shatter her mom’s heart she could do the right thing and tell Ridge the truth.

B&B spoilers suggest that Thomas won’t want to talk about the CPS call. He seems nervous and suspicious. Douglas Forrester (Henry Joseph Samiri) has also been acting strangely. Since she is a mother, could Steffy sense the tension between the two and may try and dig a little more to find out what’s going on?

I could see her possibly walking in on an interaction between father and son and without meaning to she could actually overhear Thomas and Douglas arguing about how what Thomas did was wrong and he hates how he has to keep it a secret. Steffy could come at Thomas with fury. How could he do something this manipulative? Maybe she won’t confront him. She could just eavesdrop and sit with the information trying to figure out what she should do.

The Bold And The Beautiful Spoilers – Sharing Secret

She will inform Dr. John “Finn” Finnegan (Tanner Novlan) about what her brother has done and how she hasn’t realized he was this unstable. I am sure she will feel some guilt for not recognizing it sooner and intervening before things turned out this bad.

The Bold and the Beautiful spoilers hint that Finn will reassure her that informing her father about the truth now will save a lot of heartache over keeping it from Ridge. Finn could talk her into telling her dad the truth. He could say something like, even though you and Brooke are never going to like each other she deserves the same happiness they are experiencing.

Taylor deserves so much better than what Ridge can offer. He loves her but he isn’t in love with her. Steffy could end up agreeing with him and saying even though it may hurt her family now, it will be so much worse if she tries to keep this secret. So could the CPS truth officially end a “Tridge” marriage before it even starts? I guess we’ll have to see what happens.