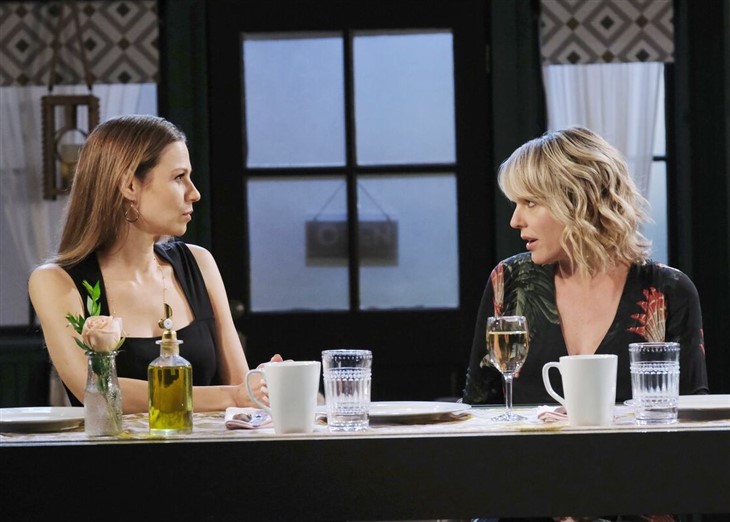 Days of Our Lives spoilers tease that Ava Vitali (Tamara Braun) will deal out some cutting revenge beyond decapitating Duke the Bear in future episodes of Days of Our Lives!

Days of Our Lives updates show that Ava felt like Nicole Walker (Arianne Zucker) and Rafe Hernandez (Galen Gering) were her only two friends in the world! Ava felt totally betrayed as well as feeling she’d been made a fool of when she overheard that her lover Rafe had slept with her best friend Nicole on the conference table at Basic Black! Days of Our Lives viewers will remember that Ava had turned her whole life around and strove to become a better person because of Rafe!

What’s worse, it’s a double betrayal so Ava wants to leave a clear message even though no one will know it’s her – she found Duke the Bear in Nicole’s desk drawer and cut his head off! It was a symbolic gesture of cutting Rafe and Nicole’s heads off and cutting them apart because the bear had been a symbol of Rafe and Nicole’s relationship!

Days of Our Lives viewers can imagine how startled and likely frightened Nicole is when she returns to work and finds a beheaded bear! Ava happens to be with Rafe when he gets the distress call from Nicole, telling him someone did something very sick and creepy at Basic Black! That doesn’t help Ava’s dark mood any when Rafe rushes off like a knight in shining armor, ready to save the day, when Nicole could have called the Salem PD and made a malicious mischief report!

No, Nicole tells Rafe she specifically needs HIM and off he goes without a thought of what Ava may think about his leaving time with her to rush to Nicole’s side! Ava is completely heartbroken and the betrayal continues to sting as she feels Rafe is rejecting her by his rushing over there to Nicole’s beck and call!

Days of Our Lives viewers won’t be surprised that Nicole accuses Sami DiMera (Alison Sweeney) of the heinous murder of an innocent teddy bear! Days of Our Lives viewers know that Sami is Nicole’s go to when it comes to assigning blame for anything, no matter how un-Sami like it would appear! Rafe promises Nicole he will investigate, but first he goes for a walk in Horton Town Square to clear his head because it was indeed a bizarre sight. Rafe then encounters Ava, and tells her what happened to Duke and Ava of course plays innocent – she asks what reason would she have to do that? Ava’s thinking but doesn’t voice the reason – because Rafe had forced her into it, trying to make a point that he already knows the reason!

DOOL Spoilers – Ava Vitali Has A Theory, But It Backfires

Days of Our Lives updates and spoilers say fans will see Rafe back down at that point, and he admits to Ava that Nicole thought Sami was responsible. Ava then jumps in with her own theory which seems to support Nicole’s accusations of Sami – telling Rafe that she saw a blonde woman in the area of Basic Black.

Ava secretly laughs about Nicole wanting someone to be prosecuted for the murder of a stuffed animal, but then Rafe wants to check security footage! At that point Ava’s plan backfires, because she knows that she would be seen on the security tapes; she manages to talk him out of it, and they make up and hug. But Ava isn’t done with her anger at Rafe and Nicole’s betrayal of her – and Days of Our Lives viewers won’t be surprised to see Ava start to spiral!

Days Of Our Lives Spoilers: Paulina Out To Get To Know The In-Laws