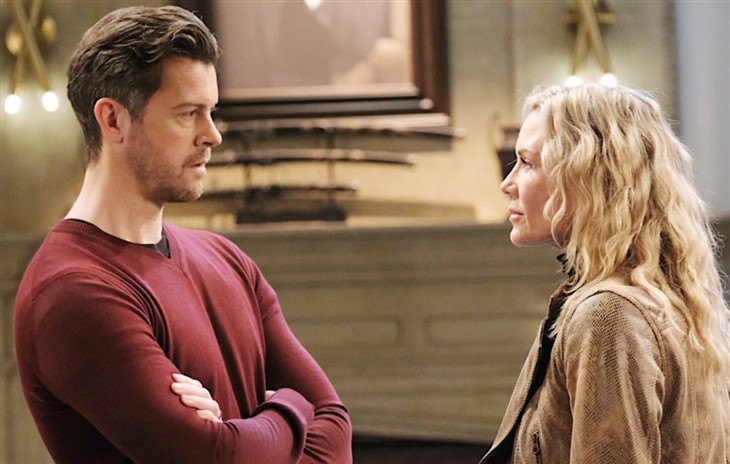 Days of Our Lives spoilers reveal that Ava Vitali (Tamara Braun) is bound to find out about Rafe Hernandez’s (Galen Gering) betrayal. EJ DiMera (Dan Feuerriegel) almost spilled the beans when he confronted Ava about Kristen DiMera’s (Stacy Haiduk) escape. As “Racole” gets closer, EJ could tell Ava the truth. If that happens, expect Ava’s rage to be unleashed.

Days Of Our Lives Spoilers – EJ DiMera Strikes A Deal

DOOL spoilers reveal that after Kristen escaped right before she was going to be transferred to Statesville, Ava and Gwen Rizczech (Emily O’Brien) helped her escape. Once EJ learned that Kristen escaped, he instantly knew that Ava was behind it. Ava wasn’t sure what to think when EJ confronted her but was surprised to get his gratitude.

At that time, EJ suggested they make a deal. EJ wants to keep Nicole Walker (Arianne Zucker) while Ava is in love with Rafe. EJ suggested that they work together to keep Rafe and Nicole apart.

Despite EJ and Ava’s best efforts, Rafe and Nicole will continue to gravitate toward each other. Remember, EJ knows about Nicole hooking up with Rafe on the conference table at Basic Black. EJ mentioned to Ava that she must have noticed Rafe and Nicole’s attraction, but didn’t expose the one-night stand at that time. The closer that Nicole gets to Rafe, the more insecure EJ will get. It could prompt him to blurt out the truth about Nicole’s night of passion to Ava, who will be furious.

Days Of Our Lives Spoilers – Night of Passion Exposed

Days of Our Lives spoilers reveal that during the week of December 20, Sami DiMera (Alison Sweeney) will get her wish. The one thing that Sami wants is EJ back, so that means Nicole will end up back in Rafe’s arms. If EJ decides to take Susan Banks’ (Stacy Haiduk) advice, he could get back together with Sami.

So, maybe EJ doesn’t expose “Racole” to keep Nicole but to make breaking up with her easier. After all, Nicole has been there for EJ. So, setting Rafe free from Ava would be his way of doing Nicole a favor.

In the winter promo, Ava beheaded Rafe and Nicole’s teddy bear, Duke. This bear means a lot to “Racole.” So, for her to do that means she is filled with rage and has discovered the truth. It’s not just Rafe’s betrayal, but Ava considered Nicole a friend. Plus, she could be angrier about Rafe getting it on with Nicole while Ava sat at the police station being interrogated. Rafe was supposed to be working, not getting satisfied on a conference table with Ava’s best friend!

We have a feeling that beheading the teddy bear is just the beginning of Ava’s revenge. Just how far will she go to make Rafe and Nicole pay for their betrayal?