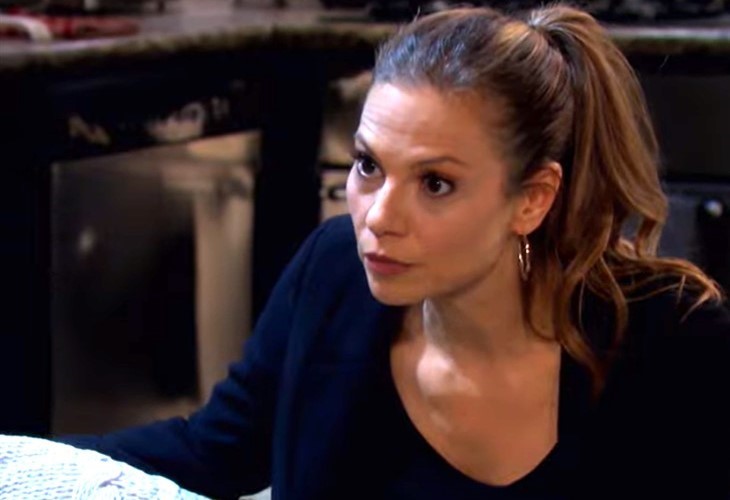 Days of Our Lives spoilers reveal that Ava Vitali (Tamara Braun) was trying to be good a bit too long. Ava is clearly off her game and out of practice as she is getting pretty sloppy. Ava is responsible for the two (soon to be three) men accusing Rafe Hernandez (Galen Gering) of being a crooked cop. However, at least one of the complainants is connected to the Vitali family.

Days Of Our Lives Spoilers – Tried So Hard To Be Good

DOOL spoilers reveal that when Ava came back to Salem, she was connected to Philip Kiriakis’ (Jay Kenneth Johnson) gambling debt. Philip made the mistake of getting money from the Vitali family. To pay it back, Philip had to use Titan Industries for money laundering.

More recently, Ava got involved with Rafe. It seemed that Ava was really trying to be good this time. For a while, Ava was doing a decent enough job at turning her life around. At one point, Ava even tried to get a job as a chef at Julie’s Place. However, Ava never got any calls back on her job search. Then, she had to endure Gabi Hernandez (Camila Banus) sabotaging Ava and Rafe’s relationship.

However, Ava was pushed too far when she learned about Rafe and Nicole’s tryst. What made it even worse is that they lied to Ava’s face. There was a time when Ava was willing to step away so Rafe and Nicole could be together. Instead of taking Ava up on the offer, “Racole” had to do things the hard way.

After learning about Rafe and Nicole’s conference room passion, Ava felt as if they made a complete fool out of her. That’s not something she was going to take lightly. True to her nature, Ava went back to her naughty ways and sought revenge.

Days Of Our Lives Spoilers – Ava Vitali Gets Sloppy

Days of Our Lives spoilers reveal that Ava was a pretty good villain in the past. However, she’s clearly out of practice or isn’t taking the time to be careful. It could be Kristen DiMera (Stacy Haiduk) and Gwen Rizczech (Emily O’Brien) taking up her time. Or, Ava’s emotions could just be too high to scheme properly.

Ava seems to have gotten quite sloppy. Ava has already used two people to claim that Rafe planted evidence. During the week of January 24, a third complainant will come forward. At least one of them used to work for the Vitali family.

When Rafe realizes that Ava’s mob associates are involved, then he knows for certain that this is about revenge. Rafe decides that he needs to break up with Ava immediately. Rafe talks to Nicole about it and says he wants to be with her. However, Shawn Brady (Brandon Beemer) interrupts “Racole” and places the commissioner under arrest.

Ava hasn’t won the war, though. Rafe plays it cool and doesn’t let Ava know he suspects her. Then, he tells Shawn what he knows and asks him to investigate. However, will Shawn be able to prove that Rafe is innocent? Will Ava go to prison or could she get away with it? We will have to keep watching the NBC soap to find out.