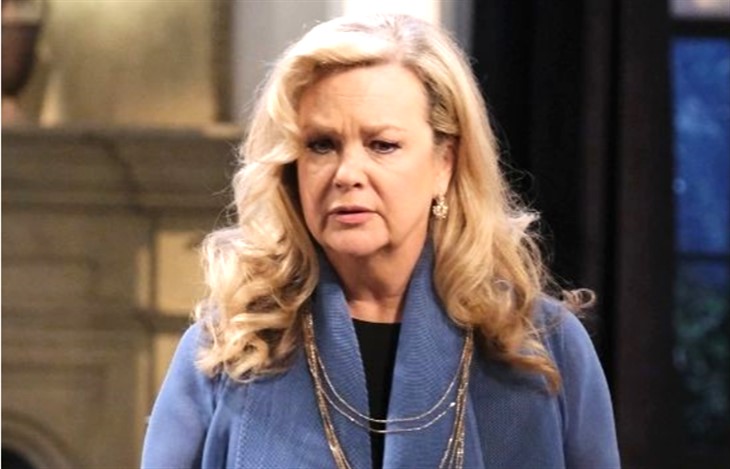 Days of Our Lives spoilers for the week of May 9 reveal that Anna DiMera (Leann Hunley) will still be facing criminal charges. The truth about Gwen Rizczech’s (Emily O’Brien) doesn’t seem to change Anna’s legal problem. Anna refuses to go to prison and tells Tony DiMera (Thaao Penghlis) that she’s going on the run. Will Anna disappear, or will the charges be dropped?

DOOL spoilers reveal that Chad DiMera (Billy Flynn) got the antidote that was promised to cure Sarah Horton (Linsey Godfrey). However, Gwen intervened and made sure Sarah got more of the hallucinogen instead of the antidote.

Maggie Horton Kiriakis (Suzanne Rogers) wanted to be sure it was safe. However, Anna was waiting for anything and anyone. Before Sarah could find out what was really going on, Anna stuck her with the needle.

Sarah demanded that Anna be arrested. Rafe Hernandez (Galen Gering) and Shawn Brady (Brandon Beemer) had no choice. Once Sarah’s mental condition regressed to childhood, Maggie insisted that charges be pressed against Anna.

It wasn’t that the injection made Sarah worse, although it did play a factor in Anna’s situation Maggie was furious that Anna injected Sarah without waiting for permission.

Days of Our Lives spoilers reveal that Gwen has been exposed. Despite this fact, Anna will still be facing criminal charges. Anna might not be responsible for Sarah’s decline, but she did inject Sarah without the patient’s or Maggie’s consent.

It is teased that during the week of May 9, Maggie and Xander Cook (Paul Telfer) will have to make a tough decision regarding Sarah. It is also confirmed that Anna tells Tony she’s going on the run. So, it sounds as if Anna might really face prison time, or she would never consider leaving Tony’s side.

If Sarah can get back to normal, that would be the only way to save Anna. Maggie might always be angry about Anna’s risky move. However, if Sarah were cured, it could be enough for Maggie to drop the charges.

There is only one issue, which is that the cure might not immediately work. Sarah could appear to be unchanged for a while. However, it is teased that Sarah’s recovery will be a slow and drawn-out process. So, the improvement will come over a period of time.

As for Anna, will Tony allow Anna to become a fugitive, or will she be cleared before it’s too late? Share your thoughts and remember to keep watching the NBC soap to see what happens next.