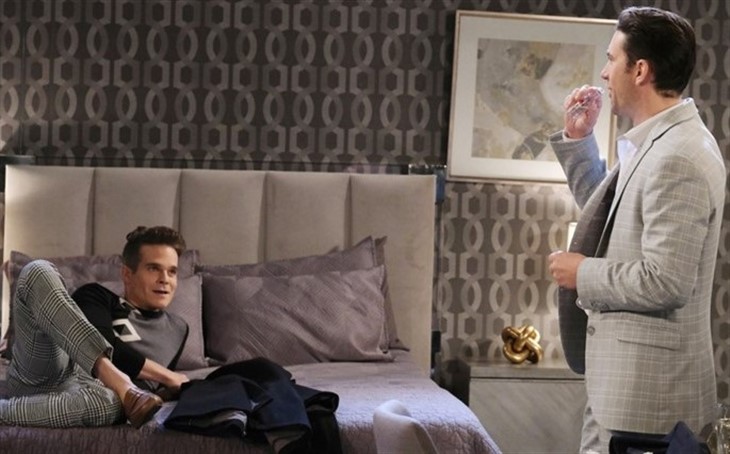 Days of Our Lives spoilers reveal that Leo Stark (Greg Rikaart) gets revenge. Leo has an article published, which could expose Chad DiMera (Billy Flynn). Will Leo give the tabloid all the details on Chad’s fake gay seduction? Not only would it humiliate “Chabby” and DiMera Enterprises, but it would paint Leo as the victim of a cruel scheme.

DOOL spoilers reveal that Will Horton (Chandler Massey) and Sonny Kiriakis (Zach Tinker) were furious to learn Leo was back in Salem. They were convinced that Leo was using Craig Wesley (Kevin Spirtas), and they were right. Sonny got Chad to agree to seduce Leo as a way to expose the con artist to Craig.

The plan failed, but Leo’s plans were still foiled when Chad turned up at the wedding with a surprise guest. As fans recall, it was none other than Jackie Cox. Leo has vowed to get revenge and won’t wait long to put a new plan in motion.

During the week of May 2, Leo has a tabloid run an article, which is most likely an expose. Leo’s target is Chad and Sonny. However, Leo probably doesn’t have much to use against Sonny right now. What Leo could use is Chad’s fake gay seduction scheme, though. Leo wants to make sure that he is painted as the poor victim while Chad is the terrible villain.

Of course, the way an article is worded can make all the difference in the world. There is no way that Abigail DiMera (Marci Miller) would publish something like that. So, Leo probably goes to the local tabloid.

Days Of Our Lives Spoilers – Chad DiMera Painted As Villain

Days of Our Lives spoilers reveal that Chad will be furious over the article being published. Not only is Chad publicly humiliated, but it puts his marriage in the gossip column again. Plus, Chad doesn’t look good to the public pretending to be gay and seducing a young man as part of a mind game. Fans know what the intent of the scheme was, but the article will paint a completely different picture.

Over the years, the DiMera family and company have gone through many scandals. When Chad and Abigail were in Paris, the whole reason they had to come back was because of a scandal. It was that scandal that got Chad fired. So, if Chad had any intention of getting back the CEO position, the article destroys that. How will Chad retaliate and what is Leo’s next move?