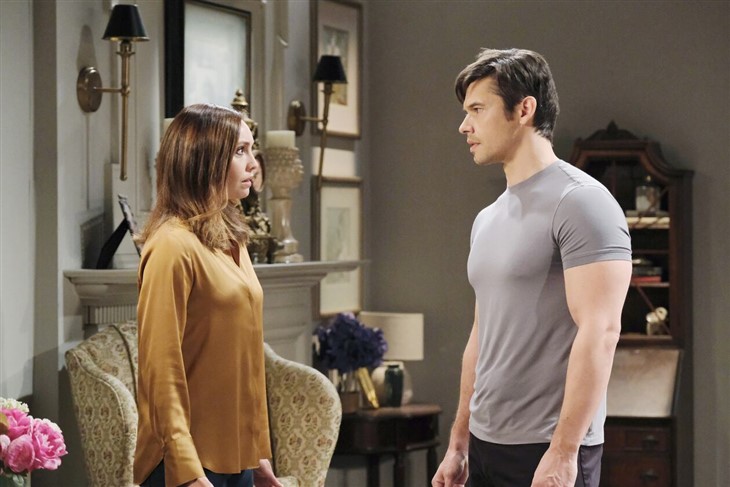 Days of Our Lives spoilers reveal the search for Abigail’s killer heating up at Sarah, Xander, and Chad all think they know who did it.

While Xander Cook (Paul Telfer) and Sarah Horton (Linsey Godfrey( were unable to find the Sarah mask they were sure Gwen Rizcech (Emily O’Brien) dumped in the dumpster, they know in their guts that she used one and somehow snuck out of Statesville the night Abigail DiMera (Marci Miller) was murdered. They figure the only way to figure it out is to go undercover.

So, Xander dons a priest’s collar and poses as a Scottish priest who will now be working at the prison to see if he can get any information out of the officials there. Gwen claims she was in the library that night and fell asleep reading a book, but nobody believes that a realistic thing that Gwen would actually do, so they need to see if anyone spotted Gwen there.

If she was in the library, there also has to be a record of her signing in, right? Well, they are hoping they find no record. Even if they do, that doesn’t mean Gwen doesn’t have her rtaks covered. So, what will Sarah and Xander find in their search?

Chad DiMera (Billy Flynn) is even more desperate than Sarah and Xander are to catch a killer. Sarah and Xander want to clear Sarah’s name and move on with their lives, but Chad’s entire life was upended when his wife was brutally stabbed to death.

He is try to be the best parent he can right now so he takes Thomas out for some sweet treats and Thomas tells him all about the man he saw in the DiMera tunnels the night his mother was killed.

This puts Chad on high alert and he is further stunned when Thomas says he sees the man and points to Leo Stark (Greg Rikaart). This is just further evidence that Leo had to be involved with the murder in Chad’s mind so he confronts Leo, who of course, plays innocent.

But Chad is out of control thinking he has Abby’s killer right there. Will the police have to be called to diffuse things? Will Chad even trust the police since they had Leo in custody already and let him go. Stay tuned to Days of our Lives weekdays to see how these stories play out.