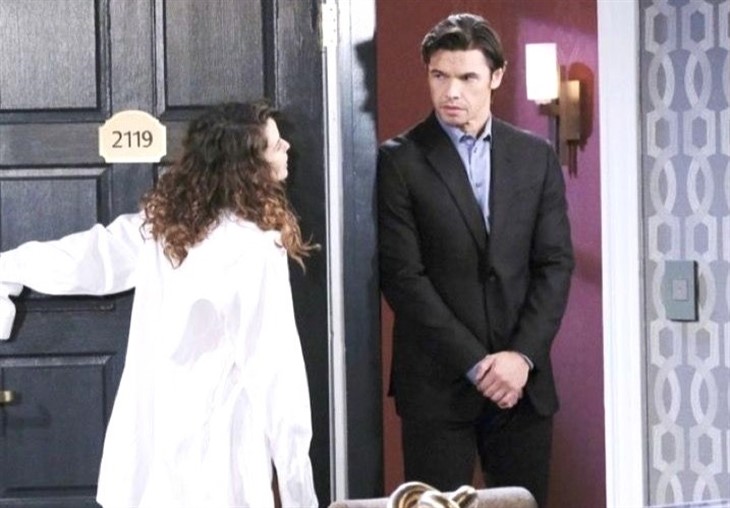 Days of Our Lives spoilers for Thursday, August 4, 2022, reveal Xander and Sarah more determined than ever to figure out what happened to Abigail.

Days Of Our Lives Spoilers – The Magic Of Dr. Rolf…And His Masks

Now that Sarah Horton (Linsey Godfrey) is sure she never made it to the DiMera mansion the night Abigail DiMera (Marci Miller) was murdered, thanks to a rock-solid alibi from Rex Brady (Kyle Lowder), she and Xander Cook (Paul Telfer) really want to know why and how Lucas Horton (Bryan R. Dattilo) saw her there. He couldn’t have been hallucinating, especially when he had this memory under hypnosis.

Do they think about the fact that Dr. Rolf (Richard Wharton) was able to create these magical masks that can make anyone look like anyone else? Xander used to even carry a Nicole mask around in his briefcase when he was working for Kristen DiMera (Stacy Haiduk). And they both know that Gwen Rizcech (Emily O’Brien) used a mask to make herself look like Sarah already.

Gwen even had much more motive to kill Abigail than anyone else except she was supposed to be in Statesville that night. How could she have made a prison break to commit such a crime?

Speaking of Abigail, Chad DiMera (Billy Flynn) is spiraling deeper into a depression over losing her but is glad to have a friend in Sonny Kiriakis (Zach Tinker).

Paulina Price Carver (Jackee Harry) seems to now be the best advice-giver in all of Salem. After all, she certainly gave good advice to her daughter, Chanel Dupree (Raven Bowens) after also listening to Kate Roberts’ (Lauren Koslow) problems.

This time she has some questions and advice for Nicole Walker (Arianne Zucker). She can tell this woman does not really want to be married to Rafe Hernandez (Galen Gering), but she should be hard-pressed to get Nicole to admit that.

So, Paulina questions her about Eric Brady (Greg Vaughan) instead. This catches Nicole off-guard. Is she able to keep up the ruse that she doesn’t want Eric anymore and they are just friends? She is certainly not happy to see the attention he is paying to another cop, Jada Hunter (Elia Cantu). Stay tuned to Days of Our Lives weekdays to see how these stories play out.

Y&R Spoilers: Is Jack Really Buying What Diane Is Selling?