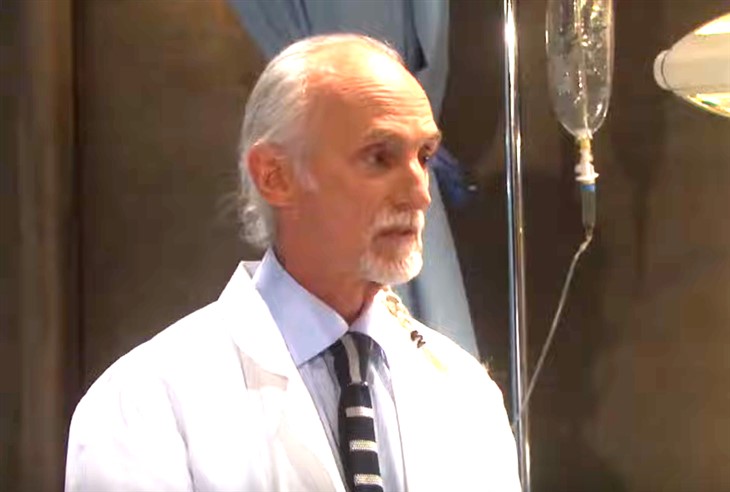 Days of Our Lives (DOOL) spoilers for Wednesday, August 3, 2022, reveal Dr. Rolf showing Kristen what he has planned now that Jake is dead and it’s nothing she ever, ever expected.

Days of Our Lives Spoilers – The Magic Of Dr. Rolf

Dr. Wilhelm Rolf (Richard Wharton) has been bringing people back to life in Salem for years, but sometimes things are out of his hand. He couldn’t bring Abigail DiMera (Marci Miller) back (as far as we know) and it didn’t look like he was the one in charge of Bo Brady (Peter Reckell) beyond Salem. However, he has an idea for Jake DiMera that won’t exactly bring him back to life. Still, it will keep Brandon Barash employed.

We all know that Julie Williams (Susan Seaforth Hayes) got Stefan O. DiMera’s heart, which means he can’t live with that heart right? Well, he can live with Jake’s heart and apparently Rolf has kept him on ice since 2019, we assume with an artificial heart, but we’re not quite sure.

When he unveils his plan to Kristen DiMera (Stacy Haiduk), she doesn’t quite know what to say. It’s nothing she ever expected, but it would certainly cause chaos with the DiMera clan and Kristen does like chaos. Besides, she liked this brother more than Jake when nobody else liked him. Maybe that’s because he essentially raped Abigail by sleeping with her when he knew she wasn’t in her right mind.

DOOL Spoilers – Jan Spears Is Back

Shawn Brady (Brandon Beemer) is still reeling over the fact that Shawn Christian isn’t his and Belle Black Brady (Martha Madison) tells him he has no legal recourse when it comes to Evan Frears (Brock Kelly) and custody, although it’s clear Evan still needs psychiatric help. But Evan is just happy to have a chance to be a dad again after his sister took David from him.

However, things aren’t going to go quite as Evan planned when Jan Spears (Heather Lindell) makes another comeback appearance as she tends to do. She wants Shawn as her baby’s father whether it’s true or not. It just fits into her own head cannon regarding what’s going to happen in her life. How far will she go to make sure her life takes the course she charted for it? Stay tuned to Days of Our Lives weekdays to see how these stories play out.