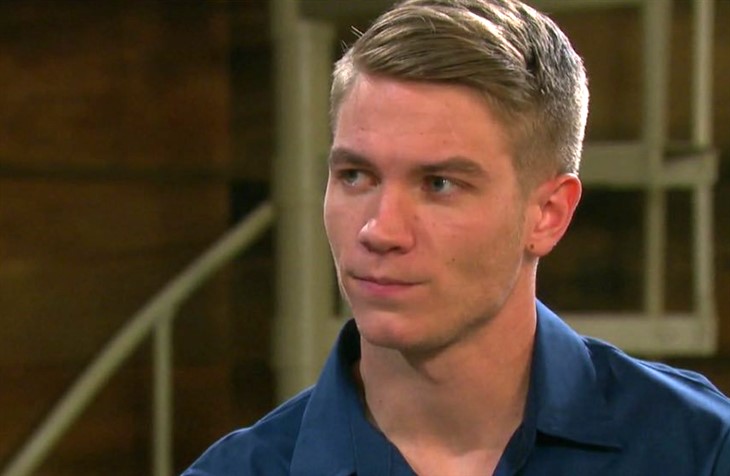 Days of Our Lives spoilers reveal that Tripp Johnson (Lucas Adams) says goodbye during the week of June 13. In an interview, the actor explains why Tripp has to be written off and if he has any regrets. Keep reading to find out everything Adams had to say about Tripp leaving Salem.

DOOL spoilers reveal that jumping out of a window to save Allie Horton (Lindsay Arnold) from the devil changed Tripp forever. Tripp died in that scene but was brought back to life by Bo Brady (Peter Reckell).

While Tripp was recovering, Allie went to her ex to see about getting back together. Even though Tripp still loves Allie very much, he knows that he deserves better than half of a woman’s heart.

During the week of June 13, Tripp will make a big decision about his future. Tripp decides it’s best for him to leave Salem and get a fresh start somewhere else. Tripp will announce the news to Steve “Patch” Johnson (Stephen Nichols), Kayla Johnson (Mary Beth Evans), and Ava Vitali (Tamara Braun).

Speaking to Soap Opera Digest, Adams talked about Tripp leaving Salem. The love triangle is seemingly resolved. Tripp doesn’t want to take Allie back because he knows her heart is divided.

Plus, it’s pretty clear that Allie viewed Tripp as the “safe” choice but her passion is for Chanel Dupree (Raven Bowens). With Allie and Chanel getting closer, there aren’t a whole lot of romantic options for Tripp.

Days Of Our Lives Spoilers – Character Written Into Corner

Days of Our Lives spoilers reveal that Adams wasn’t totally shocked by being written out. After all, this will be the second time that he’s been let go. So, Adams was more prepared this time for Tripp’s time in Salem to come to an end.

Adams also talked about how the love triangle was Tripp’s only real story. There wasn’t anywhere for the character to go after Allie and Chanel got together. Now, fans have come up with some great ways for Tripp to be used besides a love triangle. Maybe next time Tripp comes to Salem, writers will come up with some creative ideas.

As for saying goodbye to Salem once again, Adam explained how he feels about leaving the show.

“I didn’t know where my character was going, especially when the [love triangle] was over. And Tripp was mostly the third wheel…”

Adams also said that he’s received reassurance from his costars. Evans, Nichols, and Braun all told Adams that he was killed off, so he will be back.