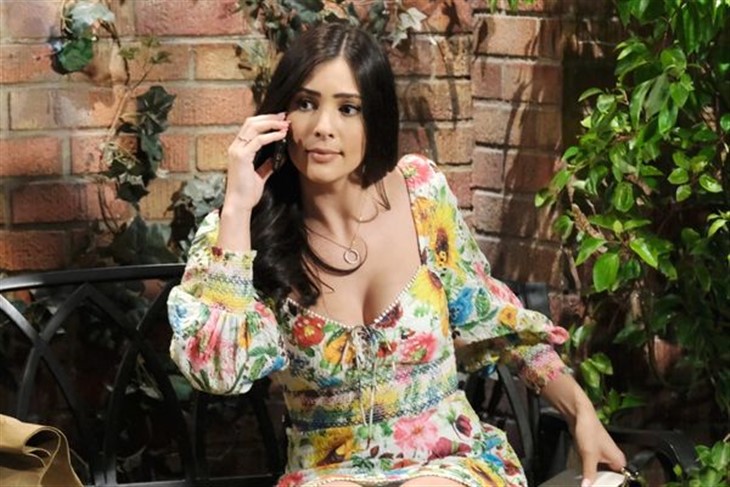 Days of Our Lives (DOOL) spoilers for Friday, August 19, 2022, reveal Gabi Hernandez’s life is about to change in a big way.

Days Of Our Lives Spoilers – Salem Is Just A Weird Place

Gabi Hernandez (Camila Banus) thinks her life is going swimmingly now, both personally and professionally. It’s nice to feel on top of the world with Li Shin (Remington Hoffman) by her side. She even gets an apology from Johnny DiMera (Carson Boatman) over the way he came onto her when he first came to Salem. She’s not quite sure what Ava Vitali is doing living in the DiMera mansion, but she is willing to live with it.

However, she has no idea why Chloe Lane (Nadia Bjorlin), of all people, would be coming to her for advice and even Chloe seems to think this is an odd set of circumstances. Chloe also has no clue what she is about to get herself into all thanks to Li and his obsession with Gabi.

Dr. Wilhelm Rolf (Richard Wharton) is absolutely horrified that Li tried to kill Stefan O. DiMera (Brandon Barash), a man he just brought back to life. Li claims he was just seeing what would happen if he turned off the machines, but Rolf can’t believe this man would try to murder Stefano DiMera’s son as he doesn’t believe anything Li is trying to sell him.

But, Stefan is not dead and in fact, he might be doing better than Rolf had even imagined. And that is about to make Gabi’s life more complicated and unusual than she ever expected. It will also make Chloe’s life quite confusing.

Days Of Our Lives Spoilers – All About Ava Vitali

Back at the DiMera mansion, EJ DiMera (Daniel Feuerriegel) is onto Ava’s tricks. She found a way to ensconce herself in the mansion and with the clan, but what she is saying doesn’t really seem to be on the up and up and EJ knows that.

Will EJ and Ava work out a deal that leaves her where she is no matter how many lies she tells and secrets she is carrying with her? And is this a new romance for EJ and Ava already? They have barely gotten over their last ones. Stay tuned to Days of Our Lives weekdays to see how these stories play out.