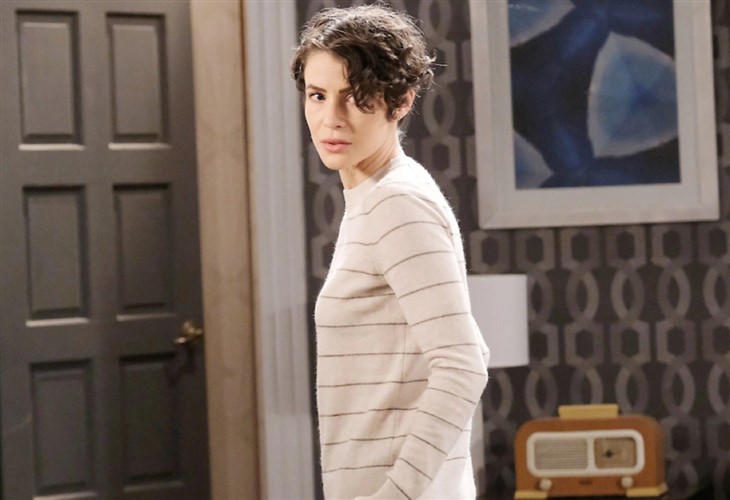 Days of Our Lives spoilers reveal that Sarah Horton (Linsey Godrey) is alive but is still being held captive by Kristen DiMera (Stacy Haiduk). Sarah hasn’t given up getting back home or on her love for Xander Cook (Paul Telfer). In fact, Sarah vows to make it home to her true love. So, what happens when Gwen Rizczech’s (Emily O’Brien) deception is exposed?

DOOL spoilers reveal that Kristen sent Ava Vitali (Tamara Braun) the mask of Sarah through the mail. Ava didn’t need any instructions as she knew what needed to be done. While Kristen sent the mask to thwart Abigail DiMera’s (Marci Miller) search for Sarah, it also helped Gwen. Both Gwen and Ava impersonated Sarah to different people.

Even though Abigail knew that something wasn’t quite right, she never got the chance to prove it. Now she is being held hostage on the same island as the real Sarah.

Xander ended up having his heart broken for the second time by Sarah. Of course, neither of those instances were the real Sarah. One was Kristen nearly a year ago while the other was Gwen wearing a mask.

Even though Chad DiMera (Billy Flynn) shared Abigail’s theory with Xander, he has given up. When Xander thinks about his love triangle, he decides to propose to Gwen. In Xander’s mind, Gwen has been there for him even while he searched for Sarah. There is quite a bit that Xander doesn’t know, though.

Days of Our Lives spoilers reveal that Sarah might be stuck on an island, but she hasn’t given up. It’s been nearly a year but Sarah is determined to get back to Salem and to Xander. Don’t expect Sarah and Abigail to escape on their own, though.

It is teased that Chad and Tony DiMera (Thaao Penghlis) end up going to the island. So, it sounds like there is going to be a big rescue operation! Head writer Ron Carlivati told Soap Opera Digest,

“This is kind of an all roads lead to the island, and it will be nice to see the DiMera brothers teaming up; we don’t get to see that too often. So Chad and Tony team up to try and find Abigail when she goes missing. And everybody is kind of ending up headed for the island.”

That means when Sarah and Abigail are found, Gwen will have a lot of explaining to do. It also brings up the question of what Xander will do. After all this time, is he still in love with Sarah? Or is he now in love with Gwen? Although Xander might understand Gwen’s insecurity, we have a hard time picturing him forgiving her for keeping Sarah a prisoner.